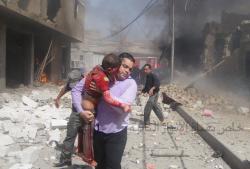 Four explosions have rocked the Iraqi city of Karbala, around 118km south of the capital Baghdad, leaving at least 30 people dead and 66 more wounded, sources say.

The back-to-back explosions occurred on Sunday outside a governmental building and damaged many cars, police officials say.

The first blast tore though a crowd of guards and civilians gathered in front of an office issuing identity cards and passports, while the three other explosions went off a short time later as emergency services arrived.

No one immediately claimed responsibility for the attacks, caused by explosive packages, according to police.

“I was inside my house when I heard a big explosion. When I got out I saw many people wounded and some bodies on the ground,” Mohammed Naeim, a local resident, told the Reuters news agency.

Bombings and attacks are once again becoming an almost daily occurrence, often targeting security personnel, after a drop in violence levels.

“The bomb attacks in Karbala today have so far killed nine people and there are 99 people wounded,” Alaa Hammudi, head of Karbala province’s health department, said.

He said the toll could further increase.

Lieutenant-General Othman al-Ghanimi, the army commander for forces across five provinces in central Iraq, including Karbala, put the toll at 10 dead and 86 wounded.

He said the four explosions included two roadside bombs, a car bomb and a suicide explosion, but did not say the order in which they happened.

An AFP journalist at the scene reported seeing several bodies covered in blood being taken away by paramedics, and major damage to vehicles and buildings, with some houses completely collapsed.

Security forces cordoned off the area in the aftermath of the attacks, the journalist said.

An interior ministry official said entrances to Karbala had been closed. Karbala is a predominantly Shia city that is home to the mausoleums of Imam Hussein and his half-brother Abbas.

It has frequently been the target of Sunni Muslim fighters in the past, such as on January 20 when a spate of blasts against Shia pilgrims on the outskirts of Karbala killed 45 people.