In the month of February, 84 incidents of violence against Shia Muslims were reported in the nations of Afghanistan, Bahrain, Iraq, Lebanon, Nigeria, Saudi Arabia, and Syria.

It is important to note that cases of violence noted in this report are, in fact, only a sample of the incidents of anti-Shiism faces by the world’s Shia minority. Shia Rights Watch recognizes that incidents of violence are in large part not reported as many religious minorities live in fear of further persecution on the basis of their religious identity. 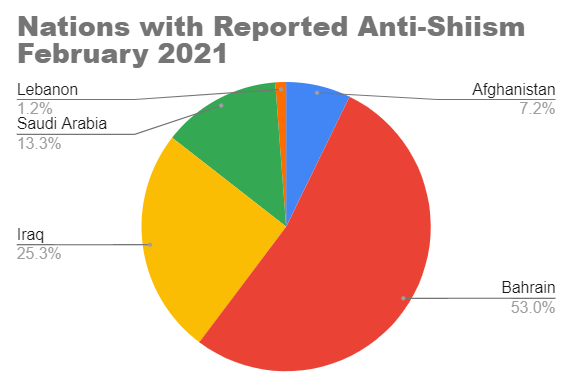 On the 20th of the month, a roadside bomb injured three people and caused significant property damage in Kabul.

Later in the month, extremists assassinated five family members of a journalist who had previously been killed months ago.

Shia Muslims in Afghanistan live as a targeted minority. Extremist organizations such that of the Taliban and individuals in association with ISIS consider Shia Muslims to be “vermin” and “infidels” deserving death.

Those identified as Shia Muslims are at higher risks of facing violence. Despite the notable targeting of Shia Muslims in the country, authorities have done little to protect the group against human rights violations.

Shia Rights Watch recorded 45 incidents of anti-Shiism in the Kingdom of Bahrain.

The father of Ali Mushaima was arrested in mid-February. Ali Mushaima died after sustaining injuries from birdshot pellets shot at close range by security forces. The Bahrain Independent Commission of Inquiry established by King Hamad to investigate the February 14 uprisings concluded that Mushaima’s death resulted from unjustified “use of excessive force by police officers.”

Shia Rights Watch expresses concern for detainees as sources announced cases of COVID-19 among those held in Jaws Prison and the Dry Docks Detainment Center. The authorities have yet to instituted life-saving interventions to limit the propagation of the disease.

Local activists report 12 Shia deaths and 7 injuries as a result of individual assasinations and small bombs. Attacks occurred in Baghdad, Kirkuk, and Diyala. The attacks were spread across the month.

On February 4, prominent critic Lokman Slim was found deceased. Slim, publisher and filmmaker, was shot multiple times in what those close to him call a political assassination.

After being diagnosed with Covid-19, Malama Zeenah Ibrahim, the wife of Shaikh Ibrahim Zakzaky, was temporarily released in order to receive treatment.

In a recent interview, the Chairman of the Resource Forum of the IMN, Professor Abdullahi Danladi, discussed the detainment of Sheikh Zakzaky. Details on the interview can be found on ShiaRightsWatch.org.

The death sentence of Ali al-Nimr, Abdullah Zaher, and Dawoud al-Marhoun, all minors at the time of their arrest, were commuted to 10 years in detainment.

Later in the month, the parents of Ali al-Nimr were arrested following a house raid.

Ali al-Nimr is the nephew of Sheikh Nimr al-Nimr, an active critic of the Saudi Arabian government, who was executed in January 2016.

Also commuted was the sentencing of Isra al-Ghamgham. Originally sentenced to be executed, al-Ghamgham’s sentence has been commuted to eight years.

Her husband, Musa Hashem, was among those newly sentenced in February. Ali, Aoicher, Khalid Ghanim, and Mojtaba al-Muzayen.

A detonation of an explosive-laden car in Afrin city, Aleppo, killed six and injured two dozen others. Locals report damages to nearby infrastructure as well.

Shia Muslims made up a minority in the nation. Predominantly concentrated in villages and towns, Shia Muslims became prominent targets of violence in the hands of ISIS.

Despite the weakening of the extremist organization, violence targeting the Shia Muslims minority continues to be fueled by extremism.