Shia Rights Watch continues its commitment to studying trends of anti-Shiism in the year 2020.

The first month of the new year targeted violence against Shia Muslims remained prevalent and in need of international attention.

In January 2020, a total of 121 incidents of anti-Shiism were reported in the nations of Bahrain, Saudi Arabia, Iraq, Syria, Afghanistan, Pakistan, and Nigeria. 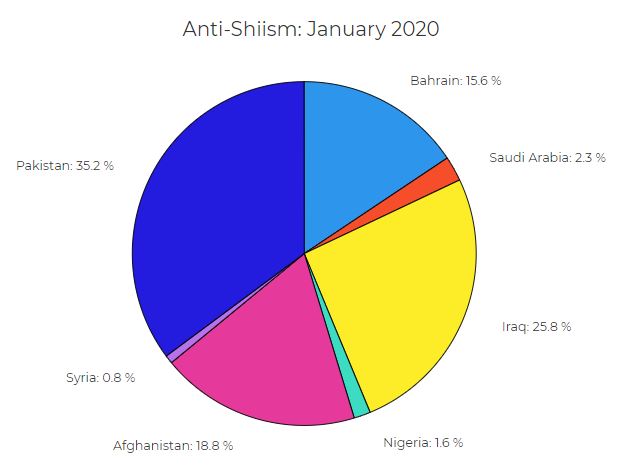 Those summoned noted a lack of clear reason for their appearance. Upon questioning, the clerics were asked to justify their sermons and their delivery of Quranic interpretations. End-of-the session prayers such that for mercy towards martyrs and the safety of the displaced as the result of conflict were also inquired.

The clerics were detained for over three hours before their interrogations. Shia Rights Watch notes that summonings and short term arrests are tactics used to induce fear in clerics and communicate an awareness of community events.

Mohammad Faraj was diagnosed with Multiple Sclerosis (MS), a deteriorative condition in which damage to the central nervous system disrupts communication between the brain and the body. Symptoms of MS, among others, are vision loss, pain, impaired coordination.

Elias al-Mulla, now 28, was arrested for participation in pro-democracy activism. Al-Mulla was sentenced to 15 years in prison on coerced confessions obtained through prolonged torture. He was diagnosed with stage 3-colon cancer while in detainment. Sources within the Al-Mulla family note the authorities failed to address his initial symptoms early on. They furthered that upon calls for help, he was met with physical violence.

Al-Mulla and Faraj are just two of the many individuals who were diagnosed with cancer while in detainment. Hameed Khatam passed away from stomach cancer late in January. Khatam was diagnosed while in detainment, charged with “insulting the king” on social media. He was denied treatment and upon his release, his cancer had progressed to stage 4.

The Alternative Punishment Law in Bahrain has become a beacon of hope for some in Bahrain. At the same time, many Bahrainees express concern for implications of the Law and the broad basis for release and assignment to alternative punishment. Moreover, Shia of the country note that this law is not an application of justice, but a shift in response to limited resources in the country.

The death penalty was a topic of concern for the Shia communities in Bahrain in January. Mohammad Ramadhan and Hussain Moosa were among a number of detainees facing execution. The death penalty is especially worrisome, given the coercion of confessions from detainees. Sources withing detainment centers and their loved ones report the use of torture and threats in forcing detainees to signed false confessions. Moreover, detainees are not allowed sufficient due process during their trials. Death sentences in Bahrain are an outright questioning of dignity and human rights.

The Eastern Province of Saudi Arabia is still home to the highest prevalence of violence in the hands of government authorities. Early in January, Mohammad Hussain al-Ammar was arrested after a raid. Raids remain the most prominent form of direct violence in the nation. Homes are entered illegally, and individuals are taken with force. Rarely are their families offered any information on charges or whereabouts of their loved ones.

The lack of communication by authorities stands true for the arbitrary summonings. Shiekh Ali Rahma was among those summoned for questioning without the presence of sufficient documentation or justification.

Upon injury and death, families of victims report a refusal by authorities to give access to the bodies of deceased inmates. Residents speculate the refusal to grant access to bodies is a means of concealing evidence of torture.

None-the-less, Shia of Saudi Arabia rally against injustice. In late January, residents of Qatif gathered in the thousands to mourn the death of young men killed by authorities.

Iraq was home to the highest body counts among countries with incidents of Anti-Shiism. With over 30 total acts of violence against Shia Muslims, 20 individuals were killed, and 16 others were injured.

Incidents of violence in Iraq are individual assasinations. The detonation of explosions is the leading form of violence leading to injury; 7 different bomb detonations were reported to Shia Rights Watch.

In an incident in late January, two gunmen targeted the Sayeda Ruqaya shrine in Damascus, killing one and causing property damage. The shrine is a religious site that hosts the tomb of Ruqaya, the three-year-old daughter of Hussain, the grandson of Prophet Mohammad, who was martyred in Karbala, Iraq. Ruqaya is said to have died en-route as the caravan of Hussain’s family was paraded in Arabia after his death.

The incident is not the first of its kind. Sources within Syria report targeted attacks against Shia religious sites, many positing that the attacks are eased by lacking security resources amidst turmoil in the country.

Early in the month, a roadside bomb in Mazaresharif killed one and injured three others. Located in northern Afghanistan, Mazaresharif is the countries fourth-largest city.  The term “Mazaresharif” translates to “Tomb of the Prince” and is in reference to a mosque in the city center believed by locals to house the body Ali, a notable Shia Imam. The mosque is also called the Blue Mosque in recognition of blue tiles that decorate the building.

In August of 1998, the city was home to the most violent massacre of civilians by the Taliban in the countries twenty-year war. Within days, Taliban forces sought out and killed male  Shia Hazara, Tajik, and Uzbeks while kidnapping and raping their female counterparts. The exact number of victims from the massacre remains unknown.

On the 23rd of the month, Nigerian forces used tear gas and firearms on demonstrators who took to the streets, calling for the release of Shiekh Ibraheem Zakzaky. One person was killed, and another was severely injured.

In 2019, the Nigerian government outlawed the Islamic Movement of Nigeria, which was lead by Sheikh Zakzaky. Zakzaky himself remains in detainment.

In a detonation targeting the Shia of Pakistan, 35 were injured and 10 were killed. A suicide bomber detonated his explosives vest targeting a religious school in Quetta.

Quetta is home to Pakistan’s densest population of Hazara Shia Muslims. The Hazara are ethnic Shia who exist as diaspora fleeing Anti-Shiism in Afghanistan.