February stood witness to 151 incidents of anti-Shiism. Bahrain, Saudi Arabia, Iraq, Pakistan, Nigeria, Egypt, and Afghanistan were all nations in which violence against Shia Muslims occurred. 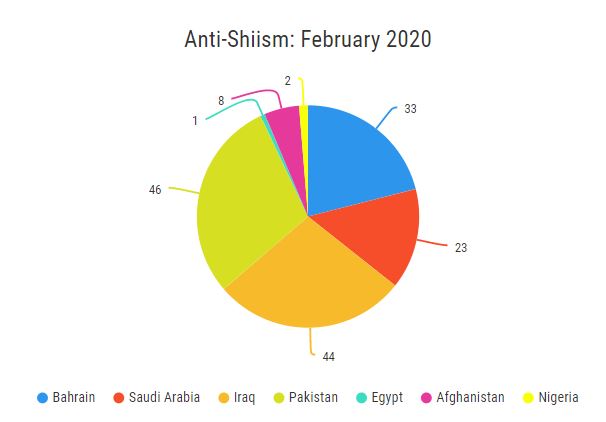 The treatment of Shia Muslims in Bahrain is worrisome. Shia Muslims in the country, while they make up the majority of the nation, face hardships and restrictions in the hands of the dominant minority, which in the past ten years have made the expression of Shiism more difficult. With a change of laws and regulations which challenge rituals inherent to Shiism, Bahrain has effectively criminalized the practice of Shiism.

Leaders of the communities are summoned and questioned about their sermons and religious interpretations. In early February, Mulla Abdul Zahra Al- Samahiji was called in for questioning. He was then detained for reasons undisclosed by officials.

As a result of the adoption of new laws, there is a high density of detainees in Bahrain’s prisons. Those in detainment suffer significantly from the refusal of authorities to meet their most basic rights and the use of violence to extract confessions.

Maltreatment many times follows the detainees well after their imprisonment terms.

Sayed Kadhem Sayed Abbas Al-Sehlawi passed away in February as the result of negligence in the duration of his detainment. Al-Sehlawi had reported severe pain in his stomach and back. It was two months before authorities transferred him to a hospital. After his release, Al-Sehlawi continued to be treated, but the extent of the damage was too high.

Medina Ali and Hajer Mansoor, both once detainees, spoke out about the conditions in which they were held while in prison. They stated they were kept in their cells sometimes 24 hours at a time with limited food and water. They were forbidden, like the rest of the inmates, from any religious rituals or even conversation with the other prisoners.

The two prisoners recounted physical violence, as well. Ali notes that the head of the prison punched her in the back, leaving days-old pain. Mansoor was hospitalized on numerous occasions as a result of the torture endured. In 2018, Mansoor had discovered a lump in her breast, yet was denied access to medical attention for weeks.

Mansoor’s son-in-law Sayed Ahmed was also detained in 2017- he is yet to be released.

Arrests and raids were the top forms of direct violence against Shia Muslims in the Kingdom of Saudi Arabia. Residents of Awamiyah report raids in their town. Forces blooded neighborhoods, damaging property.  In an attack in late February, eight were arrested, charged, and sentenced for a total of 58 years in detention.

Among those in detention are numerous minors and detainees being charged with crimes committed before they reached legal age. Muhammad Issa al-Faraj is one of 11 awaiting execution. Al-Faraj’s charges are from his participation in protests before his 10th birthday.

Approximately 100 members of the Islamic Movement of Nigeria were acquitted in mid-February. Both members and the leadership were absolved of blames in the events that lead to the Zaria massacre in which hundreds of Shia Muslims were killed.

This was the latest terminal trial in a case in which the Zaria government had sued 200 members of the IMN.

None-the-less, violence against the Shia of Nigeria continues. In a violent confrontation with protestors, a minor was killed by the hands of Nigerian forces. Police had used live ammunition to disperse those protesting the lack of justice in the case of Shiekh Ibrahim Zakzaky.

The case of Sheikh Zakzaky and his wife remains ongoing and little development.

A bomb in Quetta killed eight and wounded 22 others. The detonation took place near the Quetta Press Club and lead to extensive property damage. The weapon is said to have aimed to harm protestors of an international conference at the site.

On February 23, the Egyptian Court of Administrative Judiciary ruled the closure of all Shia websites and TV channels.

Censorship in Egypt is prominent. In 2018, the ratification fo the Anti-Cyber and Information Technology Law allowed officials to censor websites that are considered to threaten national security or economy. The law further allowed for the release of data and the penalization of visitors to the sites.

The majority of the websites taken down under the law have been new websites or sources of criticism to State systems.

Sources report the new judgment to be the function of fear of foreign political influence in the country.

Shiism in Egypt has a long and prosperous history. The most recent censorship of Shia media is a form of religious repression. Shia Muslims in Egypt have long expressed loyalty for their country and have denounced any political associations.

Iraq was home to 13 incidents of violence, which led to the death of 12 and the injury of 32 others. The events occurred in various areas of Baghdad. Some days, parallel explosions happened across the city. Shia Rights Watch notes that many incidents of violence against Shia Muslims in rural areas of Iraq are not reported in fear of retaliatory violence.

ISIS claimed at least one of the explosions in the month. The others are unclaimed and underinvestigated.