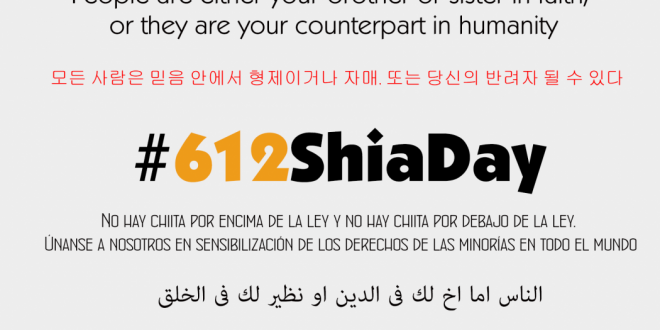 International Shia Day was first instituted in 2015 in commemoration of the massacre that occurred at Camp Speicher in 2014 in which ISIS militants escorted upwards of 3,000 Iraqi soldiers from Camp Speicher, an Iraqi military base previously operated by the U.S.A., to Tikrit, an ISIS-controlled town 140 km north-west of Baghdad. Once they arrived in Tikrit, soldiers were divided by religious affiliation; the non-Shia allowed to live, the Shia condemned to death by firing squad.

Shia Rights Watch promotes International Day 2020 as an opportunity to reflect on biases and systemic racial, ethnic, and religious discriminations that plague the international community. On this day, rights to expression, practice, and even existence for groups marginalized must be recognized and discriminatory institutional systems must be reformed.

Shia Muslims, including Zaydis, Ismailis, and Twelvers, make up half of the world Muslim population. Yet, despite their vast existence, they have one of the highest rates of discrimination and violent targeting worldwide.

Shia Muslims are subjected to discrimination, imprisonment, and even execution for practicing their beliefs by not just terror groups, but also by governments who have systematized anti-Shiism within their domestic and foreign policies.

Violence against Shia Muslims does not differentiate victims by age, gender, location, or socioeconomic status. In 2020, Anti-Shiism led to the massacre of newborns and pregnant women in Kabul, Afghanistan, leaving a scene so horrific that Médecins Sans Frontières’ head of programs in Afghanistan, Frederic Bonnot said, “It’s shocking. We know this area has suffered attacks in the past, but no one could believe they would attack a maternity ward. They came to kill the mothers.”

The year 2020 showed the world that agents of Anti-Shiism not only ostracize Shia Muslim existence; they also disfavor humanitarian actions post-violence. This was most recently seen in the death of 19-year-old Aya Hachem and the abrupt withdrawal of donations to help her family after she was identified as Shia Muslim.

In 2019, an approximate 3,540 incidents of imprisonment, denaturalization, injury, loss of life, life-sentences, kidnapping, denial of services, arrests, and property damage targeting Shia Muslims were reported by Shia Rights Watch. The organization noted that this number is just the tip of the iceberg as the majority of Anti-Shia violence is not stated in fear of persecution.

Not only do people not report violence, they actively withhold their religious identity.

This International Shia Day, Shia Rights Watch calls on all individuals to stand proud in support of individual rights to exist. We all have the right to express our identities without the fear of being targeted. The right to Be is regardless of race, ethnicity, gender, and socioeconomic status, and 2020 is the year to stand up for our brothers and sisters in humanity.