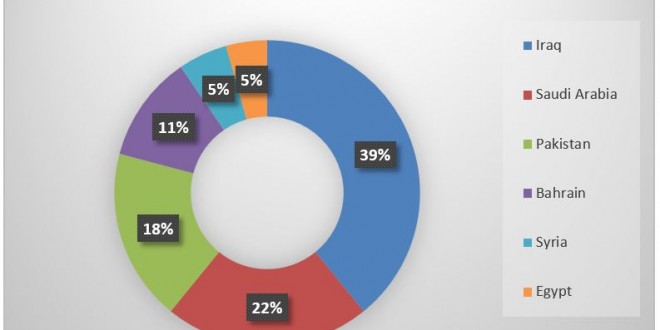 From May 15th to May 31st, Shia Rights Watch conducted a poll on its website, asking people about which countries they believe witnessed the most hostility toward Shia Muslims. In the 16 days this poll was open, there were 1,150 respondents. The results were relatively dispersed, but Pakistan, Saudi Arabia, and Iraq received the highest number of votes.

Pakistan, which received 210 votes, has a record of widespread human rights abuses against Shia Muslims occurring in within its borders. Over the period that this poll was open, nine people were killed in four separate attacks around Pakistan in four separate attacks. Many of these attacks involved gunmen on motorbikes shooting and killing Shia Muslims outside of their homes and places of employment. The worst day in Pakistan over this period came on May 25th when unknown gunmen killed four people in three incidents in the city of Quetta. The four victims are from the Hazara minority group which has faced ongoing violence in both Pakistan and Afghanistan. Violence in Pakistan against Shia Muslims and other minority groups has led the U.S. Commission on International Religious Freedom (USCIRF) to recommend that the country be placed on the list of Countries of Particular Concern (CPC).

Saudi Arabia, which received 250 votes, witnessed two devastating attacks within a week of each other. On May 22nd, a bomb detonated outside of a Shia mosque during Friday prayers in Saudi Arabia’s Al-Qatif province, killing 21 and injuring 80. The following Friday, May 29th, a suicide bomber detonated himself outside of a Shia mosque in Dammam, Saudi Arabia, killing four and injuring 10. These two attacks were highly discussed in the media as ISIS claimed responsibility for them, therefore representing the expanding influence of the terrorist group beyond the borders of Iraq and Syria. The international community has condemned these two attacks, and Shia Rights Watch has called on the Saudi government to take greater actions to prepare for attacks such as these.

Over the course of this poll, Iraq received 450 votes which is the highest among the countries. This vote total mirrors the fact that most violence against Shia Muslims occurred in that country. From May 15th to May 31st, there were 254 Shia deaths. Attacks such as IEDs and suicide bombings occur almost daily in Iraq and usually carry victims in the single digits. On the other hand, attacks in Saudi Arabia and Pakistan occur less often but there tends to be more casualties than many singular incidents in Iraq. Although the news of bombings in Iraq does not make the news as often as those in other nations with large Shia populations, the danger for Shia in the country has not faded.

Overall, this poll has been helpful in analyzing how the perceptions of Shia Rights Watch community aligned with the information on Shia casualties. The information obtained from this study will be helpful as we further integrate your voice into our work.