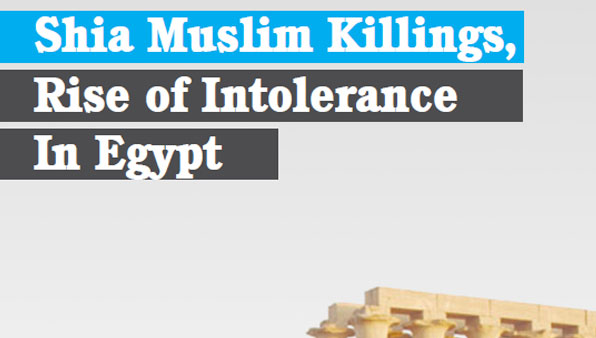 Media and technology are improving every day, but human rights are not. New pro-democracy movements in the world, especially in the Middle East, aim to defend suppressed nations and bring justice to the table, but the results have been the opposite. Minorities, whose rights were always violated, continue to face discriminations even after recent historical Arab Spring events. Egyptian Shia have never been fully accepted into society. They have faced discrimination, violation and exclusion in the Salafi-based society before and after the Arab Spring. Shia are forgotten minorities in Egypt, where there is no respect for them as Muslims living in a Muslim society. This report intends to highlight the violations toward Shia in Egypt and urge the new government to take action to stop suppressing Shia and promote their human rights, as every government is responsible for spreading peace and democracy in the world.

Egypt is a country mainly in North Africa, with the Sinai Peninsula forming a land bridge into Southwest Asia. Egypt is thus a transcontinental country, and a major power in the Mediterranean Basin, the Middle East and the Muslim world. Covering an area of about 1,010,000 square kilometers (390,000 sq. mi), Egypt is bordered by the Mediterranean Sea to the north, the Gaza Strip and Israel to the northeast, the Red Sea to the east, Sudan to the south and Libya to the west.

Egypt is one of the most populous countries in Africa and the Middle East, with a population of over 80 million. The vast majority of Egyptians live near the banks of the Nile River, an area of about 40,000 square kilometers (15,000 sq mi)[1], where the only arable land is located. The large areas of the Sahara Desert are sparsely inhabited. About half of Egypt’s residents live in urban areas, mostly spread across the densely populated centers of greater Cairo, Alexandria, and other major cities in the Nile Delta. Islam is the official state religion, Arabic is the official language and Shari’a (Islamic Law) is the primary source of legislation.

Egypt has been undergoing many political changes since the Arab Spring. The Arab Spring gave hope to many, especially minorities, that the new changes would bring freedom and democracy to their communities. However, in most cases, the transition phase provided opportunities for some to take advantage of the unrest and target minorities violently. Shia are among the growing numbers of minorities that became victims of the unrest. Shia, under pressure under the Mubarak government, are still facing discrimination in the new Egyptian government and political system.

Shia in Egypt; Past and Present

Egypt is a country with strong Shia ties. Egypt was a Shia country when it fell under the Shia Fatimid caliphate, in opposition to the Abbasid caliphs in Baghdad at that time, who were Sunni Muslims, according to Osama Hammad, professor of Islamic history at Alexandria University.[2]In fact, Egypt was a Shia nation when ruled by Fatimids from AD 969 until 1171, but became Sunni ruled after the fall of the Fatimids dynasties. The Fatimid Islamic Caliphate was a Isma’ili Shia Muslim caliphate that spanned a vast area of the Arab World, from the Red Sea in the east to the Atlantic Ocean in the west. Originally based in Tunisia, the Fatimid dynasty extended their rule across the Mediterranean coast of Africa, and ultimately made Egypt the center of their caliphate.

Despite this history, Shia are now a forgotten minority in Egypt to the point that there are no accurate official statistics about the number of Shia in Egypt. Government and Salafi authorities claim that there are only a few thousand Shia in the country, less than 1% of the entire population[3]. However, Ahmad Rasim Al-Nafis, a Shia author and activist, believes there are more than 100,000 Shia in Egypt today, but they hide their faith for security reasons.[4] Many believe that the number of Shia living in Egypt is increasing.

Shia Muslims are being targeted as a group with political intentions that are tied to Iran. However, in reality, the vast majority of Shia, including Egyptian Shia, has no personal or political ties to the Islamic Republic; they are practicing their faith and honoring their belief with no political intentions. As Vali Nasr states in his book, The Shia Revival, “most Arab Shias are ethnically Arab…Nevertheless, Sunni extremist propaganda would make them out to be sinister interlopers.” [5]

It is time for the world to disconnect Shia from Iran and honor their dignity and rights.

Human rights activists and organizations are concerned about extremist groups who support policies aimed at destroying the rights of others. These groups are continuing to advance in the Egyptian government. Sources reveal some religious groups in Egypt, such as the Salafis, became heavily involved in the Egyptian political arena after the 2011 uprising. These groups are extremely against Shia establishing a political party or even engaging in any political activity, a basic human right for all citizens.[6]

The state of human rights and freedom of religion in Egypt remains poor due to government intolerance toward minority religious groups. Religious freedom, in particular, has worsened dramatically in recent months. Authorities continued to prosecute and sentence citizens with different religion or faith. They allowed official media and Sunni clerks to encourage violence and hatred against religious minority members, especially Shia, while failing to protect them or to convict responsible parties.

The Egyptian Constitution, under Article 46, provides for freedom of belief and the practice of religious rites; however, the Government restricts these rights in practice. United States Commission on International Religious Freedom states:

“Egypt has a poor overall human rights record that includes repressive practices which seriously violate freedom of thought, conscience, and religion or belief, and serious problems of discrimination, intolerance, and other human rights violations against members of religious minorities, remain widespread.[7]

Even though the restrictions and violations are widespread, minorities always face the most difficult situations compared with the majorities within societies.

Shia face political and employment discriminations: arbitrary arrest, jail, and closure of Islamic centers are some major violations that Shia face in Egypt.

Shia in Egypt have faced discrimination and human rights violations, especially in recent years. News reports have documented that some Shia have had to leave their homes, often moving to other cities, because of threats from Salafis. Farah Sesames, a reporter for Emma Magazine reveals the life story of Abu Hasan, an Egyptian Shia, who fled with his family from their apartment after a neighbor posted a note on their door threatening to kill them if they did not leave the area.[8] “This is third time we have had to move in four years” said Abu Hasan[9]. He and his family represent one of many cases of Shia who have no security and freedom to practice and show their faith in Egypt.

Activists complain about the Shia situation in Egypt. Ahmed Rasim An-Nafis, an Egyptian Shia and professor of medicine at Mansura University, said: “There have been smear campaigns about us in the state press and in mosques, and our loyalty has been questioned.”[10]

Shia faced discrimination during Mubarak’s regime, and even after his resignation the situation did not improve. Many were arrested during the Mubarak regime and asked to identify Shia members of their communities. The recent revolution has not changed the situation, but the human rights violations could worsen. Wahabbis and Salafies are spreading hatred and intolerance among Egyptians in public and social media even more than before; this will cause increased intolerance and lack of safety for Shia in the future

Sheikh Mohammad Zoghby is one of many Salafi scholars who threaten Shia in public and during TV interviews. In a YouTube clip, he says that he would cut off Shia’s fingers and tongues: “I must chop off the breath of Shia in Egypt.” Sheikh Zoghby calls on Egyptian authorities to act against Shia in this country.[11]

In a similar YouTube video, another Salafi cleric, Sheikh Muhammad bin Hussein Ya’ghob, states that he only supported Morsi as the new president of Egypt because Morsi considers Shia more dangerous than Jews for Islam. Ya’ghob predicts that under the new government Shia’s power will decline. [12]

The head of Alexandria’s Al-Fattah mosque, a Salafi scholar, said “We cannot have Shias in our mosque,” in an interview. When asked if he would support the construction of a Shia mosque to allow Shia to pray in their own center, he answered, “No.”

Salafi and Wahabbi’s fatwas and teachings have mirrored the government’s actions. In 2011, security forces put on end to an Ashura celebration and detained seven attendees. EgyptIndependent.com reported that nearly 3000 Shia were attending the Ashura celebration that day at Cairo’s Hussein Mosque. Ashura, which marks the death of the Prophet Mohamed’s grandson Imam Hussein, is one of the most important Shia celebrations. [13]

There are increasing numbers of incidents in which Shia were arrested, detained, questioned and threatened for practicing their faith.

A Shia Muslim student is under investigation in al- Azhar University. A female student of the most important university of Egypt could face legal action and be expelled from school if proven to be Shia Muslim. Students of the university filed a complaint against a female student, accusing her of being Shia Muslim.

Recently Egypt has been showing more and more discrimination toward Shia Muslims. SRW found it unfortunate to see anti-Shi’ism growing so rapidity in Egypt that citizens believe it is a crime to practice Shia faith. Salafi and Wahhabi extremist have been encouraging anti- Shi’ism in Egypt through social media and media outlets, as the result discrimination and hatred toward Shia Muslims are increasing among public.

On Sunday, June 23rd, 2013 a mob of 3000 people attacked houses of Shia Muslims in the small village of Zawya Abu Muslim in Giza, killing four people including Hasan Shahate, a very well-known and peaceful Shia leader.

The attack was motivated by lectures of anti-Shia clerics who called Shia infidels in the village. Wahhabi and Salafi clerics have been spreading and encouraging sectarian conflict in mosques as this report highlighted earlier. This incident was motivated by one of those speeches according to Shia natives of the area.

Shia rights violation in Egypt has passes the political and systematic phase and now general population, neighbors and community members are acting against Shia Muslims in such an inhumane way.

There is substantial evidence that Egyptian Shia abstain from practicing their faith or participating in rituals in fear of detention or arbitrary arrest. The status of Shia in Egypt may lead to dissatisfaction and unrest among this forgotten minority. Since Mohammed Morsi was declared President of Egypt, there has been growing speculation about the future of Egypt’s minority under the new government, but little has been said about the Shia community [14]

SRW believes the right to freedom of religion or belief should extend to every individual in every community and country. Since its inception, Shia Rights Watch has been committed to this fundamental principle and universal standard and will continue to report on countries where this freedom is lacking and make recommendations for reform.

Shia Rights Watch believes that the new Egyptian government must:

To these ends, SRW urges the U.S government to encourage Egyptian authorities to protect human rights for all, unite the minorities and work with them to build a stronger nation.