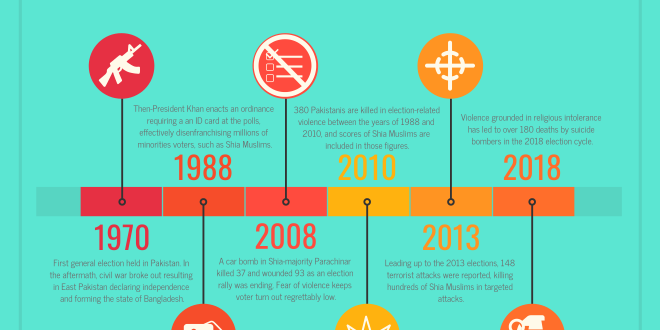 The recent elections in Pakistan have been fraught with worry. In a place where the military has directly ruled for roughly half of its 70-year existence and has seen only one peaceful transition of administrative power uncertainty has plagued the entire process. For the roughly 200 million people living in Pakistan, this election comes at a critical moment for a region riddled with war and unrest. Of Pakistan’s 200 million, approximately 97% are Muslims, and an estimated 15-20% of those are Shia Muslims.

Religious minorities in Pakistan, including Shias, have been continually targeted by the proliferation of unchecked extremist groups in the region. According to a report released in April of 2018 by the Human Rights Commission of Pakistan (HRCP), over 500 members of the Hazara community were killed and an additional 627 injured in terrorist-related incidents in Quetta, a Shia-dominant region, in the last 5 years. The same commission has also condemned the authorities for turning a blind eye to the continued forced disappearances of those perceived as being critical of the government. HRCP reports that in 2017 alone, Pakistan’s commission of inquiry on enforced disappearances received 868 cases. HRCP spokesperson I.A. Rehman told reporters that the authorities continue to ignore “intolerance and extremism,” which allows for attacks on religious minorities like those of the Shia faith.

Because of widespread unrest and rampant terrorist activity, election cycles in Pakistan have historically been plagued by turmoil and violence. Unfortunately, this year was no different. While military guards at polling stations increased their numbers by nearly five times compared to the 2013 election, forces were unable to prevent terrorists from wreaking havoc at the polls. In early July, an ISIS suicide bomber murdered 149 people participating in an election rally. A few weeks later, on the day of the general election, another suicide bomber killed 32 and wounded scores more in an attack on a polling station in Shia-dominant Quetta.

These types of voter intimidation tactics are incredibly damaging and are designed to instill fear in the Shia community and prevent them from engaging in civic activities. In the past, Pakistan has seen an array of incidents targeting prominent or professional Shia Muslims, a strategy designed to keep the Shia community from achieving socio-economic equality. Examples include Professor Akhtar Hussain, shot on the street by unidentified motorcyclists, and layers Atif Zaidi, Ali Murtajiz, and Syed Raziul Hasan Shah, all killed for no apparent reason other than their Shia faith affiliation. This trend in targeting killing and suicide bombings, combined with a growing number of instances of forced disappearances, is being carried out with near-impunity as an attempt to cripple the Shia community and drive them down into submission and, eventually, oblivion.

Since it is widely acknowledged that terrorist groups continue to target Shia Muslims, it is particularly disturbing that several anti-Shia political parties have emerged this election season running on platforms that include promises to “punish those who blaspheme Islam.” This includes the banned political party Ahl-e Sunnat Wal Jamaat (ASWL), a hardline Sunni group associated with both al-Qaeda and ISIS, and who are responsible for the murders of hundreds of Shia Muslims, whom they consider heretics. Even more troubling is that the courts have allowed several individuals who are on Pakistan’s terrorism watchlist, known as the “fourth schedule,” to run as political candidates, stating that “there aren’t enough valid complaints to prevent them for competing for public office.” One example is Aurangzeb Farooqi, leader of one such political party, who in video clips of speeches can be seen shouting, “Shia are infidels!”

Fortunately, these extreme, terrorist-affiliated groups, while not entirely defeated, failed to pick up the desired number of seats in the election which was held on July 25th. The Pakistan Tehreek-e-Insaf (PTI) party garnered the largest amount of votes, breaking the duopoly that has long been held by the Pakistan Muslim League-Nawaz (PML-N) and the Pakistan People’s Party (PPP). The PTI, lead by former professional cricket player Imran Khan, has ostensibly run on a platform of inclusivity and has promised to bring Pakistan into an era of social harmony, where citizens of all religious, racial, and ethnic communities can prosper economically. While SRW does not endorse any politicians or political parties, we hope these results signal that a new era of tolerance and pluralism is on the horizon.

SRW urges the newly formed Pakistani government to act swiftly on the PTI’s promises to ensure protection and equal economic opportunity of all religious minorities, including Shia Muslims. Additionally, SRW recommends that the new government immediately repeal harsh blasphemy laws that facilitate discrimination against religious minorities. It is vital for the future of peace and security that new measures are enacted that hold accountable all individuals or groups who engage in violent and destructive terrorism designed to target Shia Muslims. Finally, the freedoms of speech and peaceful assembly should be rigorously and institutionally protected as vital elements of a strong, healthy society.