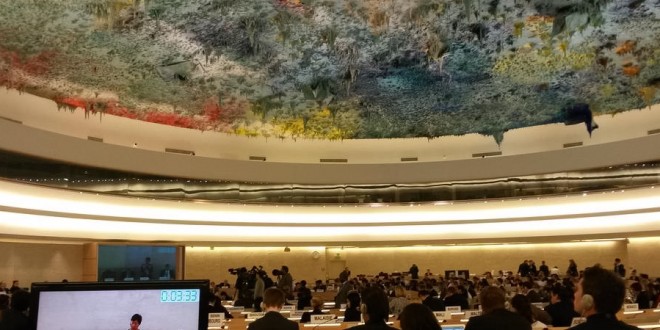 On behalf of Shia Muslims around the world it is a pleasure to be able to present this address to the commission. Today I am here to draw your attention to the increasing oppression of Shia Muslims in Azerbaijan. Thus far in 2016, Azerbaijan has bared witness to several acts of anti-Shi’ism violating the fundamental human right of freedom of religion. While the Shia represent 65% to 80% of Azerbaijani population, they face many discrimination such as unlawful arrests or prevention of practice through the country.

2015 saw the death of 9 Shia and the detainment of 35. In these past six months of 2016 authorities have banned 732 religious books with unjust reason.  Azerbaijani forces also destroyed a Shia Religious under the pretext of expanding the street. In recent years, Azerbaijan authorities have been limiting Shia Muslim activities although this country is majority populated country. More than 150 Shia activists including 18 clerics are in prisons of Azerbaijan.

Activists believe during the past few years the Wahhabists have grown notably in Azerbaijan, especially in areas of the country sharing borders with Russia. This is of particular worry for Shia Rights Watch as human rights organizations in Azerbaijan are currently not allowed to investigate these matters. Azerbaijan currently ranks 127th of 177 on Transparency International’s corruption perceptions index and over the years has frozen assists on bank accounts of NGOs and jailed some of the country’s most prominent human rights activists.  In April large numbers of Shia leaders were arrested unfairly. Police raided the homes of clerics and activists, including Karbalayi Qismat, and Syed Nazem and Seyed Waqar. As of today, there exists over 150 Shia activist and 18 Shia scholars imprisoned on basis of religious expression and identity.

Other concerns regarding freedom of speech for NGOs and Shia are related to recent arrests of journalists and in the 2015, Azerbaijan’s parliament debated a law to ban the display of flags honoring the killed Shia Imam (Hussein) on streets and also prohibiting those Azerbaijanis who have received religious education at international Shia seminars abroad from performing religious ceremonies. These violations of freedom of religion and expression are in violation of the current Azerbaijani constitution, which grants Azerbaijani citizens the right for life, freedom, safety, culture and religious practice, the presumption of innocence, and the right to equality regardless of denomination. Without the right to freedom of practice, radicalism becomes a greater threat, undermining prospects for a peaceful society where individuals can reach their full potential.