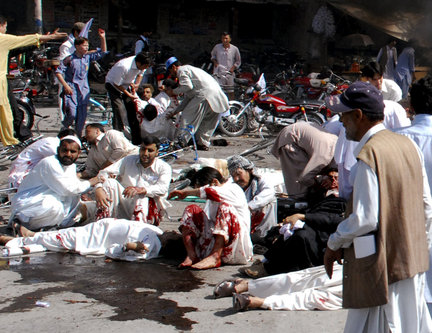 A series of anti-Shia attacks targeted Shia Muslims in Pakistan in January 10th, 2013. About 90 Shia Muslims were killed and 123 injured in two bombs blasts on the Alamdar Road in Quetta Pakistan.

Following the attack, thousands of Shia Muslims participated in the Sit-In protest , with the 87 Bodies in front of them. The families have not buried the bodies of their loved ones and instead have held the funeral until the government listens to their demands and take action against Shia targeted killings.

Previously SRW contacted Pakistani government through Pakistani Embassy in Washington DC asking them to put more effort to protect the Shia Muslims from Anti-Shia terrorist groups but the Pakistan Embassy in US did not reply to our emails and letters.

According to USCIRF, Lashkar-e-Jhangvi, a Sunni militant group affiliated with the Pakistani Taliban, claimed responsibility for the attack.  In the year 2012 many attacks have targeted religious processionals and pilgrims travelling to religious sites as well.

Pakistan Government’s silence is worsening the situation every day. There are many Shia Muslims and other minorities in the country that are being discriminated against. Pakistan is among countries where Shia have no security and serious actions are needed to stop the violence.