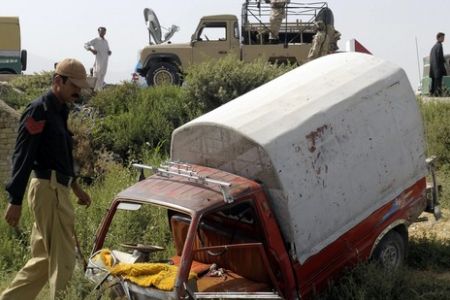 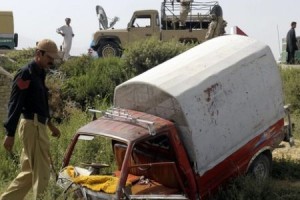 At least thirteen Shia people have been killed and several others injured after gunmen opened fire at a passenger pick-up in Pakistan‘s southwestern province of Balochistan.

The Saturday attack occurred in Quetta, the provincial capital of Balochistan, when two armed men riding a motorcycle started shooting at the vehicle carrying people from Hazara Shia community on their way to work, Xinhua reported.
The assailants managed to flee the scene, which was later cordoned off by the police. The injured were shifted to the Bolan Medical Complex in the city.
No group has claimed responsibility for the assault.
In a similar incident on Friday, at least seven Shia Muslim pilgrims were killed and several others wounded when a group of heavily-armed militants attacked a bus on the outskirts of Quetta.
Shia leaders have frequently accused Pakistan’s security forces of failing to protect Shia people against assaults by militants.
In a major attack in September 2010, at least 53 people lost their lives and around 200 others were wounded when a huge explosion took place in Quetta at a Shia Muslim rally held in support of Palestinians.