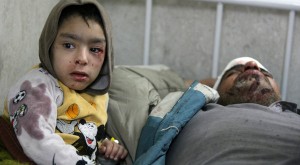 BAGHDAD — A series of explosions in Shia neighborhoods killed nine Shia and wounded dozens more on Tuesday (1-24-2012), the latest in a wave of sectarian attacks. During the past month, insurgents have increased their attacks against Shia’s, including pilgrims marching to a shrine in southern Iraq for one of their holiest rituals.The violence began early on Tuesday, while many Iraqis were heading to work.

Around 7 a.m., a car bomb exploded near a gathering of day laborers in the Shia neighborhood of Sadr City, killing six people and wounding 23. About half an hour later, another car bomb detonated near a bakery in the neighborhood, wounding 13.

An hour later, three explosions struck north Baghdad. A blast near a school in Shulla killed two people and wounded 10, including several students. Another person died in an explosion in the neighborhood of Huriya.

Salah Haider, 40, was standing near the first explosion in Sadr City and was wounded in his arms and legs.