Incidents of Anti-Shiism in April, 2016

Month of April had at least 553 deaths; most of which took place in Shia communities of Iraq. Iraq has been on top of the violation chart against Shia Muslims for 2015 and evidence thus far predicts same for the year 2016. After Iraq, Syrian and Pakistani Shia lives were lost the most. Unfortunately, there are no clear records of the number of wounded individuals in some of the countries due to limitation of access. Shia Muslims also faced unlawful arrests and lifelong imprisonment sentences in Bahrain, Saudi Arabia, and Azerbaijan. Other violations noted include anti-Shia protests in Indonesia, Fatwa (religious statement) against this population in Malaysia, the forced surrender of passports in India and the banning of Friday prayer in Nigeria.

This report will analyze the data compiled on Shia deaths, injuries, and arrests that occurred between April 1st and April 30th, 2016. The data for this report was gathered from a variety of different sources. The most well-known incidents of anti-Shiism were retrieved and reported to Shia Rights Watch by eyewitnesses. Each incident is thoroughly evaluated for both authenticity and relevance. For an incident to be included in this report it has to show clear intent to target Shia Muslims on the basis of religious beliefs. The subsequent sections will present and analyze the data gathered by Shia Rights Watch for April.

In April, Shia Muslims were victims in many countries however this report details violations in: Iraq, Pakistan, Saudi Arabia, Syria, Nigeria, Bahrain, India, Indonesia, Azerbaijan and Malaysia. There were a total of 553 Shia deaths, dozens of injuries, four life sentences and thirteen people imprisoned this month.

Nearly fifty-nine anti-Shia attacks took place in Shia populated cities and neighborhoods of Iraq killing 534 people in the month of April. Baghdad in particular has been the most dangerous place for Shia Muslims as it continues to have the most deaths and injuries of every Iraqi city. Killings and attacks were in the form of gunfire, bombs, and suicide explosions. After Baghdad, Iraqi Shia in Madain, Basra, Nasiriya, Mahmudiya, Baquba, Samarra, Najaf and Karbala were attacked the most.

The presence of ISIS and unstable political system adds to the vulnerability of Shia Muslims living in Iraq. 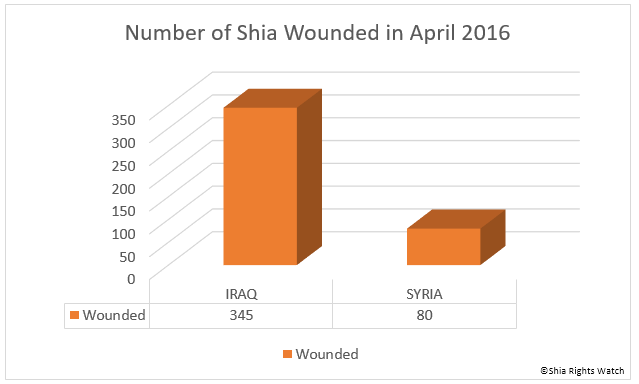 Approximately four months passed since the killing of more than 1000 of Nigerian Shia in December 2015 by state army. According to activists approximately 730 went missing since the incident. Based on our findings, during the early attack to the Shia Mosque in December and recently confirmed by Human Rights Watch and Amnesty International, the army brutally killed more than 400 Shia men, women, and children and buried bodies in a mass grave to prevent further investigation by families. More mass graves are recovered, worrying families who are still awaiting for their missing family member to come back.

Nigerian army has been trying to cover up the evidences. Local Shia stressed that a contingent of soldiers had been deployed to keep guard at the site of the mass grave in an effort to prevent the uncovering of the hundreds of bodies buried there.

After the attack the military sealed off the areas around Zakzaky’s compound, the Hussainiyya and other locations. They took bodies away, removed rubble, washed bloodstains and removed bullets and spent cartridge from the streets.

According to local activists, the burial in Kaduna was based on a court order by the state government. The depressing fact that the army killed hundreds of unarmed civilians in a forty-eight hour time-frame clearly states that this action was based on some official order resulting in a substantial loss of life at the hands of the military. 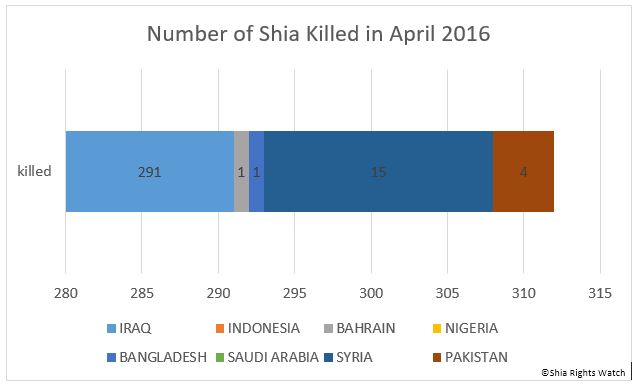 Shia Muslims continue to face violations by authorities in Bahrain.

On April 30th, Bahraini authorities arrested 35 Shia Bahraini from Karbabad. There yet to be any explanations for the arrest.

Also in this month, Ali Abdulghani, a young Bahraini Shia man, died on April 4, 2016 due to his injuries he received on March 26th, 2016 after being run over by the police in the city of Manama during an anti-government protest On March 31st, the police supposedly stormed his aunt’s house to arrest him, but he fled.

The Bahraini regime also detained Shia cleric Mohammed al-Mansi, who works as a leader of the Islamic Clerics council. The regime used the excuse that he held prayers without the permission of the Al Khalifa regime in order to arrest him. The cleric has been known for speaking out against the destruction of forty-three Shia mosques by the Manama regime. Before his sentencing he was subjected to a 48 hour interrogation.

Moreover, Bahraini court has sentenced eight people to life in jail after convicting them of “terrorism”. Another five people were jailed on 27th of April with similar accusations. It is important to note that Bahrain charges pro-democracy advocates as terrorists and most of them are Shia.

A group of Wahhabis protested in front of a Shia private property as they were holding a ritual in Bangil. The protestors threatened the Shia with racial slurs and demanded cancelation of the religious ritual taking place. According to an activist volunteer, police had to protect the participants and prevent the crowd from entering the private property.

‘Bangil’ is the name of the region and city in East Java, Indonesia which consists of eleven rural district and four villages. Wahhabis are influential in East Java and since the year 2000 they have been responsible for many murders, burned homes, and displaced Shiite Muslims in Sampang.

On April 1, 2016, Indian authorities in the district of Lucknow told Shia cleric, Kalbe Jawad,   he must hand in his passport within the following ten days. In a statement on the issue by Jawad, he says, “A revenge is being taken against me as I have been raising my voice against anomalies committed by the district administration in the Hussainabad Trust”.

Indian Shia have faced violations in the past as the government used tear gas to interrupt their rituals in 2015 and asked them to remove their banners from advertisement boards on streets.

Three Shia Muslims were shot by terrorists of Ahl-e-Sunnat-Wal-Jamaat (ASWJ) near Shafiq Mor area of Karachi on Friday April 8th, 2016. The three victims whose names were Hashim (40 years old), Ali Sajjad (27 years old, and Shamim Rizvi (30 years old), were returning from Friday prayers at Shah Najaf Imambargah in Bafarzone when suspects intercepted them.

Hashim and Ali died instantly and Shamim joined them later on when he died from his injuries in a nearby hospital. It is being speculated that this attack was in response to members of ISIS recently being killed in combat, suggesting these two terrorist groups have close ties.

Also, on April 20th, 2016 a religious scholar of the Shia School of Thought named Allama Imdad Hussan Jafri was slaughtered in Hyderabad, Pakistan. Unknown armed terrorists illegally entered the scholar’s home and slaughtered him to death.

Pakistani Shia have lost valuable members of their community due to their Shia faith and the government has yet to take any action to protect them.

Ali al-Nimr, Dawoud al-Marhoun and Abdullah al-Zaher wait to be executed after being given the death sentence. The victims were accused of participating in pro-democracy protests back in 2011 and 2012. Accourding to activists, the inmates were not appointed lawyers and forced to confess under torture where they had been forced to sign blank papers on which their “crimes” were later written down.

Ali and Dawoud were 17 and Abdullah was 15 at the time of their arrest. The three men are currently being held in Dammam Mabahith Prison.

Also, on Monday April 23rd, Saudi Arabia approved of the death sentence for Shia activist Yusof al-Mosheykhas, in the city of Awwamiyah in the eastern region of Qatif

In Lankaran, Azerbaijan, large numbers of Shia leaders were arrested unfairly. Police raided the homes of clerics and activists, including Karbalayi Qismat, Syed Nazem and Seyed Waqar, taking them into custody, according to reports by the Caucasus Cultural Center.  Shia Muslims make up 85% of the country, yet are still extremely discriminated against.

Recently, Abdullah Din, a well-known Malaysian scholar, suggested forbidding marriage between Shia and non-Shia Malaysians despite the fact that these populations intermarried throughout their history and coexisted in harmony. This anti-Shia scholar also stated “I hope the religious departments and mufti from all states will issue a clear edict on whether it is allowed for Muslims to consume food served by Shiites [Shia], including whether animals slaughtered by Shiites are halal and so on.”

Anti- Shia clerics and scholars have freedom to spread hateful messages against Shia Muslims in Malaysia, yet they express acceptance toward other minority groups. Malaysian Shia have been banned from publishing their books and keeping any Shia publications in public places.

On Monday April 25th, 2016 many people were killed via car bomb near the revered Shia shrine of Sayyida Zeinab in the town of Al-Diyabiyah, which is a common place for Shia to visit on religious pilgrimages. As many as fifteen people were killed and eighty were transported to a nearby hospital.

Syrian Shia have been slaughtered, killed and violated against by numerous anti-Shia groups in Syria including ISIS. Unfortunately many of the violations are not reported due to limited coverage by media and access by human rights NGOs.

Anti-Shiism is spreading and on the rise in many countries. It is up to the international community whether organizations or just regular people to oust the prejudice and misinformation when the governments of these countries cannot bring themselves to do so. Shia Rights Watch condemns the acts committed against Shia Muslims around the world, and urges the authorities to take action and protect this minority in their homelands.

Shia Rights Watch believes Anti-Shiism is a growing trend that will continue to gain notoriety until the international community addresses the issue.