Incidents of Anti-Shiism in August, 2017

Scores of violations bear witness to the continued systematic targeting of the Shia Muslim population around the world. The breaches of human rights range from arrest and detainment to sexual abuse and torture in prisons, and as seen this month, mass execution.

Iraq, Saudi Arabia, Afghanistan, Pakistan, and Bahrain had the most reported Shia rights violations in the month of August.

Shia Rights Watch (SRW) has compiled a list of the reported attacks that occurred in August, confirmed through extensive research and collaboration with Shia rights activists around the world. This report will detail instances both physical and psychological human rights violations, including deaths, injuries, sentencing, and tortures.

Further attacks and human rights violations may have occurred in other places; however, this list consists of the cases recorded by SRW researchers.

Iraq continues to be a haven for ISIS extremists, terrorist groups, and radical individuals.  Although less bombings and explosions were reported in August, causalities in this country are still high.

In the past, most causalities were due to explosions. However, that was changed in recent months in Iraq. Mass graves with unknown causes of death, gun men attacking individuals, the death of children due to malnutrition and killings by airstrikes have been increased.

The Iraqi army has pushed ISIS into cities like Tal Afar. The Islamic State is now consolidating power in Tal Afar, and Tal Afar remains the closest ISIS-controlled urban area the so-called caliphate that can be used to launch terror operations back into Mosul.

A mass grave was discovered in Tal Afar containing 80 bodies including children and women. As many as 163 people have been reported killed in this city alone in August.

Shia rights violations in other areas of the Iraq claimed at least 65 lives including the explosion in Sadr city on 28th that killed 14 and wounded 28. Death toll is expected to increase as many are critically injured.

Concerns over the safety of Shia and pilgrims are increasing as the month of Muharram is approaching, and millions will be visiting this country for pilgrimage.

A systemic re-evaluation of security measures must take place, ensuring the safety of travelers into and out of Iraq.

Shia rights violation is Bahrain is an ongoing concern of human rights NGOs. Torture, arrests, denial of basic rights of prisoners, and increased presence of government forces in Shia populated areas has been reported in August.

Abdel-Jabbar and Ahmed Mansoor, two teenagers detained were subjected to electric shocks while in detention at the Dawar 17 police station. Their families have reported seeing the teens in very concerning conditions on August 3rd. The teens were arrested on July 22nd as Bahraini authorities continue to arrest minors in peaceful protest. 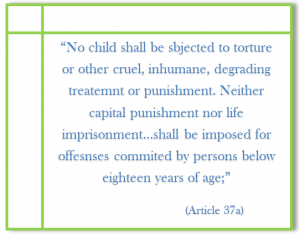 Another human rights activist, Ebrahim Sarhan, stated being tortured, punched and kicked during interrogations at the National Security Agency office. He also shared that he was stripped down, and threatened.

On August 5th, another Shia, Al-Jamri, revealed that he was subjected to torture at the National Security Agency.

On August 17th, Bahraini authorities arrested another Shia cleric, Mohieldin Al-Mashaal. Al-Mashaal resides in Kuwait and has been subject to multiple harassments by Bahraini authorities since 2005. He was arrested on King Fahd Causeway, between Kuwait and Bahrain.  There is no update on his case as of August 17th.
Forces also attacked prisoners inside Jaw Prison on Tuesday night, 22nd, as detainees held religious ceremonies inside their cells. Some prisoners were transferred to solitary confinement as punishment.

On August 28th, the family of Hassan Mushaima revealed that Jaw prison’s administration continues to deprive him of his right to receive medical treatment.

The 65 years old English teacher and human rights activist was arrested in 2011 and sentenced to life in prison. In 2010, Mushaima was diagnosed and treated for stage four follicular lymphoma in London and had since been on regular medication to prevent relapse of the disease. SRW is concerned for the health of Hassan as depriving him of receiving his medical needs can result in death.

Pro-rights protests continue to be met with violence. In late August, the village of Sanabis was left in toxic smoke in reponse to the villagers demand of updates of the where-about of 11 women arrested in the past month.

At least 14 people have been killed and 26 injured in an explosion in a high-security neighborhood of Quetta on Saturday, August 12th.

Fear generated by attacks like this one has caused some Shia to avoid traveling alone. A group of pilgrims have taken shelter in Taftan near Pakistan/Iran borders since July. They have requested to be escorted by the security forces, but their application has not been granted yet.

Although Shia makes up at least one-third of Pakistani population, Shia face discrimination and live under psychological and physical torment. In the past five years, targeting of Shia individuals in prominent sects of society has increased. Shia Rights Watch predicts an aim of inducing fear in the Shia population in this nation as a means of limiting Shia expression.

Saudi Shia are undergoing the largest military crackdown in the history of this country. Although Shia has always been discriminated against in Saudi Arabia, recent crackdowns are happening publicly and the world stands witness in silence.

Al-Awamiyah has been under siege for the last couple months. Residence report their access to the internet and other communication means such as phone lines are either limited or under the direct control of the government. Main roads to hospitals and urgent care centers are blocked. Activists, protesters and journalists are repeatedly arrested, and detainees are tortured. Homes and businesses are demolished creating financial burdens and hardship for families. Saudi Shia are among low social economic status in the country despite living in the most oil rich areas of the Kingdom. Saudi activists shared, on social media, videos of government forces calling Shia “dogs” and “infidels” as they demolished Shia mosques.  Several Shia worship centers, including Hussainyat Um-Albanin, were damaged or totally destroyed as part of a military campaign against Shia in this country.

On August 14th, government sources sealed off al-Awamiyah completely. And on 16th they demolished 488 homes in al-Moswara, forcing home owners to leave the area.  Extensive examination of violence in al-Awamiyah can be found on ShiaRightsWatch.org.

August was the deadliest month of the year so far as at least 124 Shia killed and hundreds wounded in three major attacks to the Shia and Hazara communities in this country.

Two suicide bombers attacked a Shia mosque in the western Afghan city of Herat on August 1, 2017. The attacks were reported to have killed as many as 29 individuals and wounded up to 64. Officials said there were at least two attackers: a suicide bomber, and a gunman who shot at worshippers as people gathered in Jawadia mosque for evening prayers at around 20:00 local 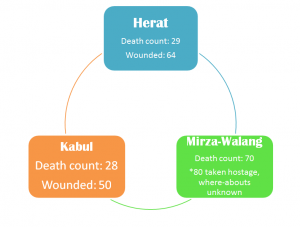 Another major attack killed 70 and wounded an unknown number of individuals in Mirza-Walang. On Friday, August 4, approximately 800 armed men launched a three pronged attack on a village in a remote mountainous region in north-central Afghanistan. Mirza Walang is a large and densely populated area in a strategic district called Sayyad in the province of Sar-e-Pul.  In a joint effort, ISIS and Taliban agents attacked the village at midnight. More than 1800 families were trapped and surrounded by the extremists. According to local activists, 80 people including women are reportedly taken hostage and transported to different regions.

Ethnically, Mirza-Walang is inhabited by Hazara who were very active in the war against the Soviets and the subsequent regimes installed by the Soviets.

The governor of the district, Sharif Aminyar, said. “Despite several demands for air support and special forces, the demands were ignored by central government,” he told the New York Times.On the 15th, three mass graves were discovered in the area containing bodies of more than 40 people including beheaded women and children. Families and friends gathered to honor the victims and bury their bodies the next day.

Afghan Shia were attacked again at Friday prayers on August 25th, by a suicide bombing followed by gunfire as they gathered at a mosque in Kabul. The attack killed at least 28 people and wounded 50. ISIS claimed responsibility.

Concerns for more human and Shia rights violation increased as President Trump announced, on August 21st, his plan to send more troops to Afghanistan. There are 8,400 US soldiers in this country, and another 4000 will join them based on the new plan. Trump said, “a hasty US withdrawal from Afghanistan would leave a vacuum for terrorists to fill.” He said his original instinct was to pull US forces out but had instead decided to stay and “fight to win” – avoiding the mistakes made in Iraq.

On 22nd, Taliban spokesman Zabiullah Mujahid said Afghanistan would become a “graveyard” for the US troops. “If America doesn’t withdraw its forces from Afghanistan, soon Afghanistan will become another graveyard for this superpower in the 21st century,” he said.

The attack on the 25th to Shia community, two attacks on the 27th and 29th in Helmand and Kabul that killed 18 and wounded 27 others could be response to the US new strategies in Afghanistan.

More than 1,700 civilians have been killed in attacks in Afghanistan during first six months of 2017 according to UN, many of which belong to the minority Shia community.

On average, 4 Shia are killed (as of 28th) and tens are wounded on a daily basis in Afghanistan, making this country the most dangerous for Shia community in August.

The month of August stood witness to just over 367 deaths and an unknown number of injuries as a result of anti-Shiism. SRW estimates the mortality rate to increase as many of those injured were in critical condition and treated in areas with limited medical resources.

The increased incidents of anti-Shiism are consistent with those estimated in previous reports. Shia Muslims continue to live in fear as they are ostracized in their home nations. Arrests of Shia activists and scholars proceed in the Gulf states and the surrounding countries.

In Saudi Arabia, the siege in al-Awamiya continues, and hundreds of properties such as homes and businesses are either demolished or damaged.

Afghanistan has witnessed at least four major attacks on Shia mosques and communities killing more than 124 and wounding tens. SRW is concerned more killings, and attacks might take place as US government announced its new strategies including sending more troops to Afghanistan.

Shia Rights Watch calls for governments across the region to increase protections for Shia and other religious minorities and to reverse and stop all ill-treatment of these populations as the month of Muharram is approaching. Historically Shia rights violations increases during this month in all countries as this community mourn in large gatherings.