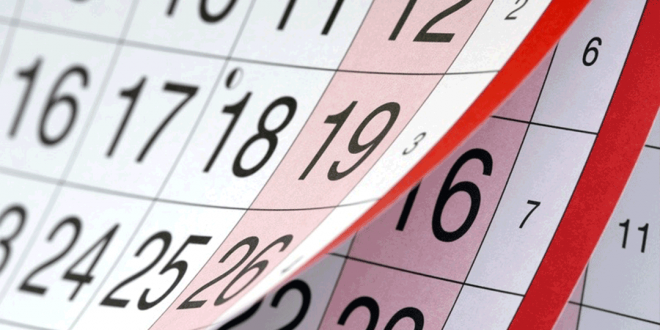 Incidents of Anti-Shiism in August, 2018

The month of August stood witness to 286 cases of anti-Shiism, or violence against Shia Muslims. In this month, Shia Rights Watch published its annual Hajj advisory in the protection of religious minorities under threat in the Islamic Hajj ritual. The advisory can be found on ShiaRightsWatch.org.

Anti-Shiism in the form of direct violence, discrimination, and marginalization, was reported in the nations of Canada, Bahrain, Saudi Arabia and Afghanistan. It is important to note that cases of violence noted in this report are in fact only a sample of the incidents of anti-Shiism faces by the worlds Shia minority. Shia Rights Watch recognizes that incidents of violence are in large part not reported as many religious minorities live in fear of further persecution on the basis of their religious identity. 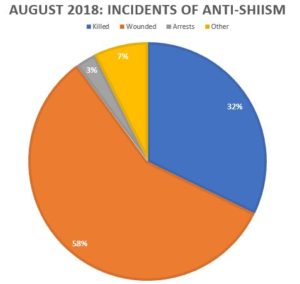 New this month, Shia Rights Watch categorizes anti-Shiism in the form of lack of action or ignorance. As a trend, incidents of anti-Shiism in the West are through the lack of recognition of the Shia population as peoples in danger. Example of such violence is seen in the case of Canada.

Amidst increased political rifts between the Kingdom of Saudi Arabia and Canada,

Canadian Judge Roger Lafrenière, ordered the deportation of a Shia Saudi Arabian who had sought political asylum in the country. The man, who will not be identified by name to ensure his Saudi-residing family’s safety, was set to be deported until the United Nations ordered the re-examination of the case for asylum.

In opposition of granting residence in the country, Lafrenière noted a “lack of evidence” that as a Shia man, the individual does face danger in his native country of Saudi Arabia.

Cases of violence against Shia Muslims is well noted by Shia Rights Watch as well as other internationally renowned human rights entities.

While Shia Rights Watch notes and acknowledges Prime Minister Justin Trudeau’s “concern with the sentence handed down by Saudi Arabia, [the nations] concern for defending human rights and …shared values all around the world,” Shia Rights Watch notes this case as an explicit show of Canada’s lack of understanding of the dangers Shia Muslims face. Such failings have cost Canada resources, as well as the nation’s reputation as an altruist nation.

Western nations must begin to increase their knowledge in regards to the identity of Shia Muslims and the influence anti-Shiism on international systems if they aim to truly defend human rights violations.

Religious and political oppression of the Shia-majority nation of Bahrain continues as Bahraini authorities harass, imprison, and abuse Shia individuals. 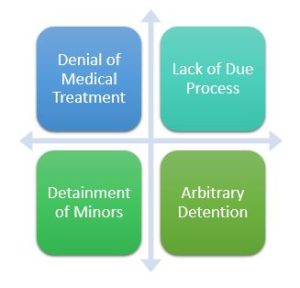 Recent updates into incidents of anti-Shiism in the nation are as follows:

A raid carried out by the government in the village of Al-Daih has resulted in Bahraini youth Sadiq Al-Ekri being arbitrarily arrested.

Hassan Mushaima, a Bahraini opposition figure, has been held in inhumane quarters and denied basic healthcare needs. The 70-year old is a cancer survivor and suffers from various other ailments. His son has declared an open-ended hunger strike in protest over reports that authorities have withheld medication and prevented regular medical screenings.

State-sponsored oppression continues as bulldozers have destroyed the recent attempts at reconstruction of the Al-Alawiyat mosque that was destroyed in the 2011 uprising.

Manama’s security forces have detained a 16-year-old that was returning from a religious pilgrimage in Iran. Ali Husain Al-Mansi was taken into custody and the minor’s current location is unknown. While two were released from detention frequencies of harassment prevail in the nation. Of those released was the Secretary-General of Bahrain’s Unitary National Democratic Assemblage Hassan Marzooq after spending 10 days in detention on undisclosed charges. Another released is Cleric Sayyed Mohiedin al-Mashaal. Al-Mashaal was arrested August 2017 on accusations of “inciting hatred against the regime”.

Despite over seven years of Shia activism in Bahrain, residents of the archipelago continue to practice their faith under repression. Congregations are denied and basic human rights are held-back all on the basis of religious faith.

Prisoners are prohibited from communicating with lawyers and families. Many have been denied necessary medical care. Sayed Kadhim Abbas, a prisoner held in Bahraini detention was denied medical care despite recognition of his pre-existing condition of a brain tumor- sources report he has since lost his sight.

New in August is the escalation in charges against Shia activists in Saudi Arabia. Israa al-Ghamgham, is a detainee and a female Shia rights activist is sentenced to the death penalty for her involvement in peaceful demonstrations in Qatif. Al-Ghamgham is the first woman to be sentenced to the death penalty. The Saudi regime has arrested a number of women from the Eastern Province with political involvement accusations, including Naima Al-Moustoud, Fatimah Nassif, Nasima Al-Sada.

Shia Rights Watch raises concern over the case of al-Ghamgham and escalation of human rights violations in the form of direct violence.

Saudi Shia not only face violence in their native country, they also endure a lack of support from the international community. Shia Muslims in Saudi Arabia need political recognition by leaders of the free world.

The international community must recognize that while Shia Muslims strive to be active citizens of their nation, they face resistance reinforced by cultural discrimination. Despite the Saudi Shia’s struggle for involvement in their nations political systems, Shia civilians face the harshest of criminalization. Shia Rights Watch raises the need for international recognition for the condition of Shia Muslims and their status as a minority in danger.

August stood witness to 2018 second largest attack on Shia Muslims in Afghanistan. In mid-August, 48 were killed and 67 were injured in a bombing of a university in Hazara community in Kabul. Those killed were university level students. The attack was claimed by ISIS militants.

The Hazara minority is a community of ethnically distinct Shia Muslims originating from Hazaristan. The Hazara count has been reduced by approximately 60% of their total population due to anti-Shia targeting by extremist

populations. Today, the population lives as diaspora in Afghanistan, Pakistan, Iran and even some Western nations.

In another incident, a Shia mosque, Khawaja Hassan, in the Paktia Province in Gardez city, Kabul was bombed while Shia worshippers were doing their Friday Prayers. The total number of casualties is expected to grow, but latest reports say at least 39 were killed and 81 were injured. ISIS has claimed responsibility.

To this point, sources report 13 cases of violence against the Shia communities of Kabul alone.

The recent attack in Afghanistan notes the trend of anti-Shiism much similar to those in Baghdad, Iraq- targeted bombings in highly dense Shia-civilian populated areas.

While the general media emphasizes the downfall of ISIS, incidents of anti-Shiism in Iraq remain an international concern. Baghdad remains home to countless bombings and Shia neighborhoods are still unsafe.  Shia Rights Watch notes that despite a lack of reporting, targeted violence against Shia Muslims persists. Sources report persistence in kidnappings and physical abuse, most likely as a means of ISIS maintenance of fear in Shia communities.

Shia Rights Watch notes a need for integrative measures to monitor violence targeting Shia Muslims in the nation of Iraq. In addition, a need exists for social services which meet the needs of civilians affected by ISIS related violence.

Data presented in this report is a limited sample of incidents against Shia Muslims. Shia Rights Watch notes a need for the recognition of this population as people in need of protection.  Across nations, Shia Muslims have shown eagerness to be active citizens in their nation-states. However, cultural and systematic discrimination have prevented Shia individuals from being vital members of their larger communities.