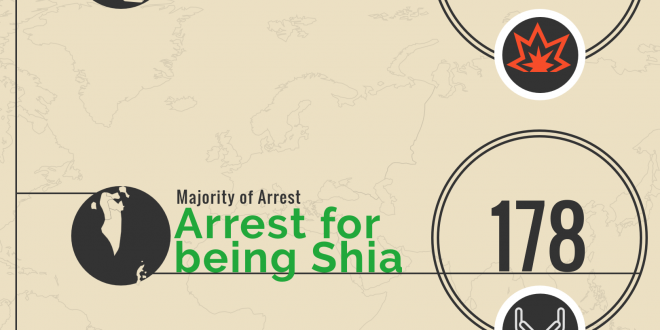 Incidents of Anti-Shiism in July, 2016

Incidents of Anti-Shi’ism in July 2016

Shia Muslims experienced some of the worst attacks in the month of July than in all of 2016 so far. 775 Shia lost their lives and 616 were injured in the month of July alone. That averages to about 25 killed and 20 wounded everyday. Most of these senseless deaths can be attributed to the increased violence of the Islamic State. As they lose ground, IS is becoming steadily more violent, both within the Middle East and abroad. However, many others blame the governments and governmental leaders for allowing the violence to escalate to such a level that civilians cannot even go to the store anymore without the fear of being killed. Shia Rights Watch condemns the hatred that fuels these senseless acts of violence and unnecessary killings, and urges the international community to come together to stop the ever-growing hatred that is threatening our global way of life.

Afghanistan bared witness to one major incident of anti-Shi’ism on the 24th of July.  A joint suicide bombing against peaceful Shia Hazara protesters resulted in a reported 80 killed and 260 wounded. The Shia Hazara are constantly under threat of anti-Shia extremism. ISIS claimed responsibility for this attack. This has been the worst attack in Kabul for months in terms of casualties.

Systematic oppression of the Bahraini Shia continues on in the month of July. A total of 158  were arrested, and a total of 19 were issued travel bans, with a variety of anti-shi’ism incidents, and one death.  On June 5th, Manama the Bahraini High Criminal Court sentenced 11 defendants to 7 years in prison and 5 others to 3, over charges of assembling in Sitra. Two days later reports from Diraz revealed government officials disabled internet and cellular connections while also surrounding the town with checkpoints to stop people from leaving or entering the city. On July 14h, inside reports revealed the Bahraini government has also issued travel bans  to a cohort of scholars. This follows travel bans issued one month ago to human rights activists attempting to fly to Geneva for a UNHRC assembly.  Reports claim that at least 19 people including doctors, lawyers, academics, journalists have been issued the travel ban.

Additionally, Shia clerics and Imams have postponed their prayers to end the holy month of ramadan in honor of Sheikh Isa Qassim, who was arrested and is awaiting trial. Later in the month at least three shia clerics and one poet were arrested for peaceful demonstration. On July 25th Bahraini authorities referred 138 people to be later tried for “spying for a foreign country”, these are in addition to the continuous arrests under the recent crackdown. Bahraini government faulty accuses protesters of spying for a foreign country in order to cover up its human rights violations.

The last friday of july showed injustice, as leading cleric Sheikh Sankour, was banned from leading friday prayer for a second time.  An additional detainee of Bahrain died while imprisoned on July 31st after being taken to the Salmaniya Medical Complex; Bahrain has faced several accusations of torturing its prisoners. Lastly, the previously arrested top Shia cleric Sheikh Isa Qassim faced trial July 27th. The verdict accused him of money laundering and funneling money.  Protests have spurred in Diraz after his arrest only to be met with greater crackdowns. 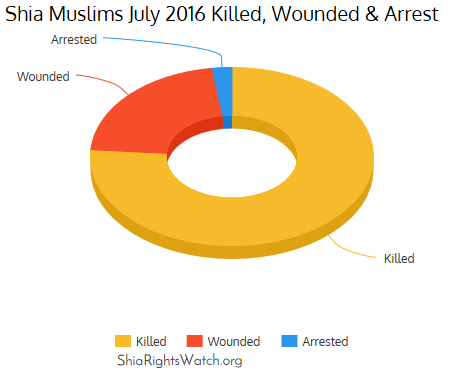 Iraq suffered 39 attacks in 15 different cities this month alone. 24 of those attacks, 62%,  occurred in Baghdad. Besides Baghdad, Karrada, Balad and Mosul were also highly targeted. 60% of victims were killed by suicide bombers, 24% by IEDs or gunfire, and 16% by execution.

On July 2nd, Baghdad experienced the deadliest attack in Iraq since the 2003 invasion. ISIS claimed responsibility for the car bomb that left 297 civilians dead and 175 wounded, but some citizens blame the Iraqi government for not acting sooner to stop the violence. A minivan packed with explosives was detonated is a busy shopping center filled with Shia preparing for the Eid-al-Fitr celebration. Days later, rescue workers were still trying to pull bodies from the rubble; some of whom had to be identified by DNA testing. As the bomb was detonated near a 3 story shopping center filled with stores and restaurants, many of the victims were children. ISIS stated that the suicide bomber was targeting Shia, although Iraqis of various backgrounds, such as Christians, were killed. Many citizens blame the Iraqi government for failing to protect its citizens from this horrific atrocity.

The violence continued on July 7th, when ISIS suicide bombers targeted a Shia shrine in Balad, killing 40 and injuring 74. Two men detonated their suicide vests near the shrine, targeting worshipers, and a third man was killed by security personnel before he could detonate his vest. Then, on July 12th, another car bomb killed 25 and injured dozens at a crowded market in Baghdad. The vegetable market, located in the area of Rashidiyah, was full of Shia shopping during rush hour.

Anti Shia sentiment has continued during the month of July in Saudi Arabia. A suicide bomb was detonated outside a Shia Mosque on July 4th in the town of Qatif.  Luckily no one in or around the Mosque was injured, though some structural damage to the Mosque occurred. The bomb went off just as people were leaving the Mosque to break their fast.Saudi authorities also arrested Sheikh Mohammad Hassan al-Habib, a prominent cleric in the Safavi region in Qatif on July 12th. Three companions traveling with Habib were also arrested.  All were taken in for questioning.  Habib is known for anti-regime protests and for his vocal criticism of the government and its policies toward the Shias. As the kingdom continues to impose more restrictions on religious activities of people in its oil-rich east, tens of Shia community members fell victim to home raids, arrests, and beatings while protesting peacefully on July 25th in Qatif.

Abdulhameed Dashti, a Kuwaiti lawmaker was sentenced to 14 years and 6 months for remarks he made about fellow gulf states Bahrain and Saudi Arabia.  He has been accused of endangering the diplomatic ties with the two countries.  Dashti has been living abroad for some months in Britain.  The MP has been a strong supporter of the Shia population and is known for his criticism of the royal families of Bahrain and Saudi Arabia.  Dashti has no plans of returning to the oil rich country.

The official inquiry came out 28 July accused Sheikh Ibraheem El Zakzaky of being responsible for the clash that occurred between the Nigerian Army and the Islamic Movement of Nigeria. The attack to Shia community in December 2015 resulted in killing of more than thousand people and disappearance of  hundreds.  It is worthy to note that Shia community were not armed, the governmental officials attacked their gathering without any notice, and the attack lasted 48 hours. A peaceful Shia leader, El Zakzaky was arrested and is still in prison and in need of medical attention. 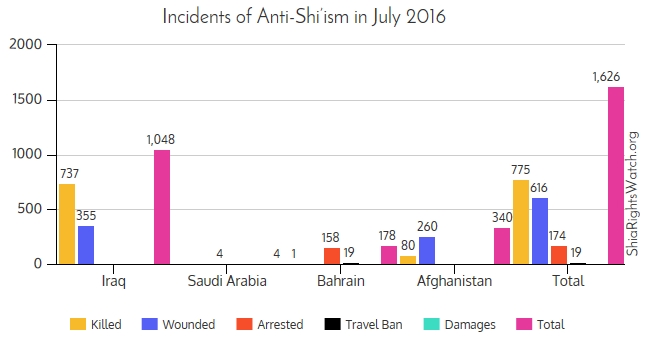 July has proven to be the most deadly month thus far in 2016 for the Shia population.  In just this month alone, 737 people have been killed and  355 wounded in Iraq, Afghanistan, and Pakistan.  Scores of Shia minorities have fallen victim to anti-Shia acts such as false imprisonment, beatings, travel bans, arrests, and Mosque defamation.  Most acts of anti-Shi’ism occurred in Saudi Arabia and Bahrain.  Anti Shi’ism is on the rise in many countries.  Shia Rights Watch condemns these acts of violence and urges the international community to put pressure on these governments who are violating these human rights.  We must ensure that minorities are able to live a safe, fair, and just life within the communities they live all over the world.