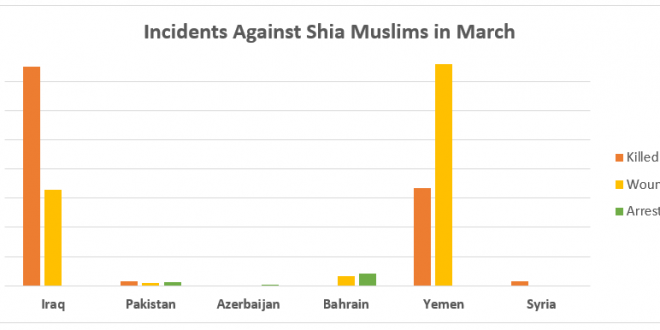 Incidents of Anti-Shiism in March 2015

2015 is only a quarter of the way through, and the trend of anti-Shiism in the world continues to increase. There were nearly 560 deaths and over 550 injuries this month. These figures result in an average over 18 deaths per day, and nearly 19 injuries per day. There has also been a spread of anti-Shia ideology that ranges from the Western shores of Africa to the seas of Southeast Asia. Anti-Shiism is a growing trend that will continue to gain notoriety until the international community addresses the issue.

This report will analyze the data compiled on Shia deaths, injuries, and arrests that occurred between March 1st and March 31st. The data for this report was gathered from a variety of different sources. The most well-known incidents of anti-Shiism were retrieved from the variety of sources including stories that are reported to Shia Rights Watch by eyewitnesses. Each incident is thoroughly evaluated for both authenticity and relevance. For an incident to be included in this report it has to show clear intent to target Shia Muslims on the basis of religious beliefs. The subsequent sections will present and analyze the data gathered by Shia Rights Watch for March.

March saw Shia Muslims targeted in 11 countries: Iraq, Pakistan, Azerbaijan, Bahrain, Yemen, Syria, Afghanistan, Lebanon, Indonesia, Morocco,India, and the United Arab Emirates. In total there were 559 deaths, 586 injuries, and 28 arrests. Although this data focuses primarily on the aforementioned categories, incidents such as the deportation of Shias in the UAE and the abductions of Shia in Afghanistan will be mentioned in this report.

The bulk of violent incidents have occurred in Iraq, which has witnessed countless bombings in Shia populated areas. Yemen suffered the most wounded during March with more than double the amount of Shias wounded in Iraq. Bahrain had the majority of the arrests this month, but Pakistan and Azerbaijan began cracking down on Shias as well. The amount of Shias that were killed or injured in Iraq has been declining since the start of the 2015, but the conflict in Yemen creates a new flash point for Shia genocide. The next section of this report will present and analyze the data compiled on anti-Shiism.

The violence against Shia Muslims in Iraq in March was the result of non-state actors persecuting Shias for their beliefs. The violence against Shia have largely come in the form of bombings and shootings that has targeted Shia neighborhoods. A total of 376 Shia Muslims were killed in Iraq this month, and an additional 165 were injured. The number of deaths is an increase from the 281 deaths that occurred last year, but injuries have significantly decreased from 486 to 165. 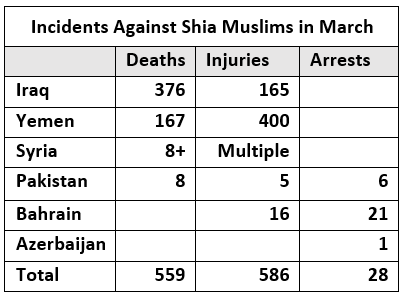 Last month’s report found that there was a decrease in deaths and an increase in injuries while this month is the inverse, and neither are tolerable. However, the trend from the past quarter does illustrate a decrease in both the amount of deaths and injuries. One could speculate that this trend is a result of the coalition forces gaining ground on the Islamic State terrorists.

The violence in Yemen began this month on March fourth when a car bomb exploded outside a stadium in Beitha which resulted in the death of 10 Shias and the wounding of 50 more. This was only the beginning of the casualties as 167 Shias were murdered, and 400 were injured. 143 of the deaths and 350 of the injuries took place on March 20th when the Islamic State terrorists performed four mosque bombings. This is the first month this year that Yemen has had reported anti-Shia incidents, but the invasion by neighboring Gulf States may bring more casualties. The Arab coalition forces have already begun racking up the civilian casualties, which include a refugee camp, and the invasion cannot end well. 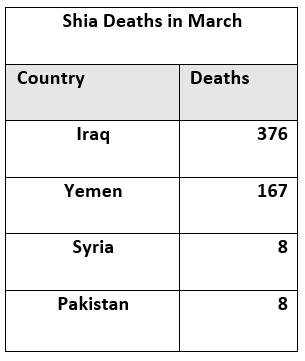 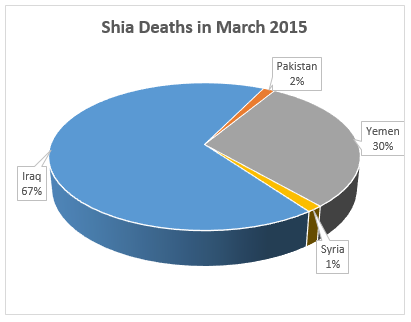 Eight Shias were beheaded at the hands of the Islamic State in Syria this month. This number is decreased from last month’s number of 11 deaths and 26 injuries, but Shia Rights Watch’s eyewitnesses have informed us of more occurrences. Unfortunately, our numbers are not exact, because we lack access to enough information within Syria. We hope to have more exact figures within the coming months. 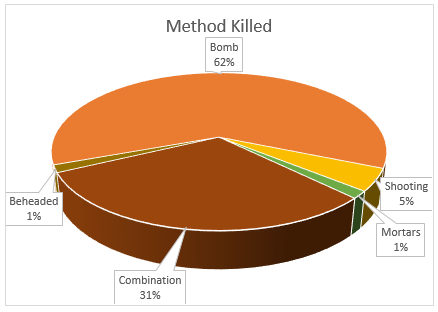 In March 2015, there was a decrease in bomb attacks targeting Shia in Pakistan. On March 20, a bomb planted on a motorcycle was detonated outside of a Shia mosque in Karachi. Two were killed and six wounded. On March 2, the Punjab government re-arrested Allam Gulam Raza Naqvi and five of his guards in Lahore. Naqvi, as the leader of Shia Movement Pakistan, was accused of promoting sectarian violence. The Pakistani Shia denounces these charges. During March, five Shia were killed and five Shia were wounded in shootings. The increase in shootings indicates a violent reaction to the recent backlash against the Pakistani Taliban. Increased backlash against the militant group followed the bomb attacks, such as the December 2014 Peshawar school massacre. On March 9, Sipah-e-Sahaba defaced a Shia mosque in Larkana with pro-ISIS graffiti. 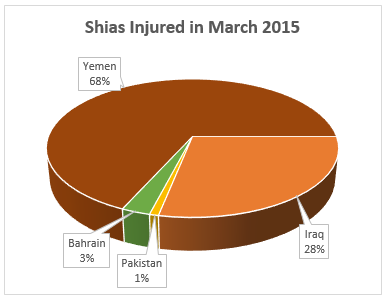 Bahrain accounted for a majority of the arrests for this month, and have not changed noticeably for the past few months. There were 21 Shias arrested this month, 21 last month, and 24 in January. This illustrates that the government crackdown on dissidents will continue if left unchecked.

The anti-Shiism has a firm grasp in Bahrain, and this can be seen by the prisoner mistreatment, attacks by the regime forces, and the systematic oppression of Shias. There have been 50 Bahraini women arrested since the beginning of 2015, and 16 others injured in attacks. 14 prisoners in Jaw were wounded during an attack, and 14 others went missing. There are an additional 155 cases of mistreatment against detainees in various prisons across Bahrain since the New Year began. On March 8th, a woman was hit with shotgun pellets which put her in critical condition. Talieb Ali was attacked by a police dog on March 23rd which resulted in his back being injured, and all of his fingers being broken. Shia children up to the age of 18 were prevented from attending school on March 3rd in Al Dair, Shahrakan, Yathrib, Hamadlify, and Al Huara. Finally, the Bahraini government sentenced 11 Shias to 15 years in prison each for allegedly attacking a police station.

The international community needs to stand with the Shia population in Bahrain, because they are being oppressed every day. These brutal attacks and mistreatments are unwarranted, and need to stop as soon as possible.

This is the first time that Azerbaijan has had an incident this year. According to Forum18, a translator and Shia scholar, JeyhunJafarov, was arrested for exercising his right to freedom of religion. He will be detained for four months while he is investigated for treason which carries a life sentence. This is not the first prisoner of conscience that Azerbaijan has held, but the previous detainees were Sunnis distributing literature which was not censored by the government. 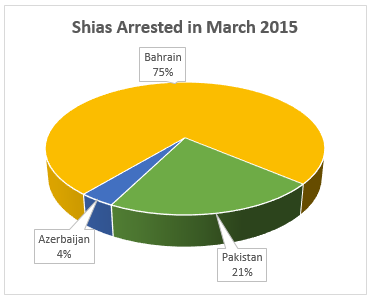 On February 24, 2015, the abduction of 30 Hazara Shia in Zabul, Afghanistan sparked international outrage. In March, a total of 16 Shia were kidnapped from the towns of Ghazni and Kanisk though no one has claimed responsibility. On March 25, 2015, 20 Baloch Shia were abducted in Daykundi by the Afghani Taliban. The Afghan government claimed the attack was meant to draw the Afghan National Army away from remote areas in eastern Afghanistan, where the Afghani Taliban are most active. There has been no progress in determining the whereabouts of the Shia kidnapped. The spike in abductions is likely to continue, unless the Afghan government takes more meaningful action in protecting its Shia communities.

Shia Cleric Abbas Zogheib’s car was shot in front of his home in Beirut, Lebanon on March 6, 2015. Luckily he was not inside the vehicle at the time that the two shots penetrated it, but he has filed a police report about the incident. Zogheib is a well-known negotiator and mediator, and he was previously shot in 2014 while intervening between clans.

Indonesia exhibited more and more anti-Shiism as the month progressed, and this is the first time that it has been included in the monthly report. 34 Shia Muslim prisoners were forced to recant their faith in front of religious clerics and local police on March 11th. On the same day, anti-Shia banners were displayed in Yogyakarta that stated “Shia is not Islam” as well as “Shiites are infidels.” Yogyakarta was declared the city of tolerance only a few years ago, and this is a sign that anti-Shiism is spreading. In the last two years, there has been a rise in anti-Shia seminars at various mosques in Yogyakarta. The seminars, which were supported by free pamphlets distributed by the Indonesian Ulema Council, advanced the message that Shiites are “heretical.” There has also been an inmate in the Nusa Kambanga island prison which is reportedly translating Islamic State propaganda from English and Arabic into Indonesian, and distributing it in the prison. The prisoner has access to the internet through corrupt guards. 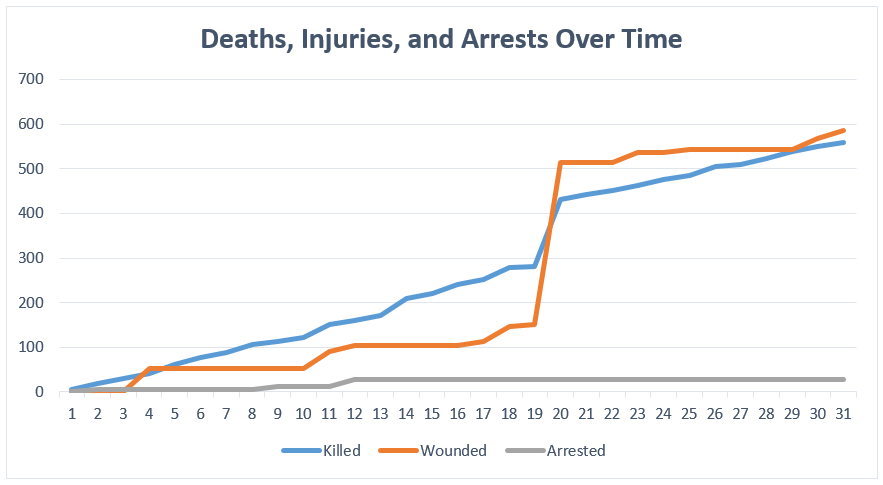 The United Arab Emirates’ authorities are deported 70 Lebanese, 63 of which are Shias, on March 14, 2015. There has been no reason given for the deportation, but some have stated that the mostly Shia population is being targeted for their religion. Others have speculated that the United Arab Emirates is attempting to rid their country of people with ties to Iran or Hezbollah.

This is not the first time that the UAE has deported Lebanese, because they deported dozens in 2009 and 125 in 2010. The reasons given by the government was that the people had connections to Hezbollah, or “for security reasons.”

However, it is deplorable for a country in the 21st Century to remove people from their territory for religious reasons. Shia Rights Watch urges the United Arab Emirates to allow these Lebanese Shias back to the UAE, and to stop perpetuating the idea that Shias are Iranians.

Salafist Mohamed Maghraoui delivered speech on the dangers of Shiism on March 17th in Morocco. The Salafists criticized the founding of the Shia group “Al-Khat Al-Rissali for Studies and Publishing” after a report was released listing the efforts of Iran to spread instability to African countries. Morocco has come to regard Shia Islam as a destabilizing force and serving Iranian goals.

The municpal government of Lucknow is denying Shias the right to put up billboards on a stretch of road between two imambaras where it is tradition to put up banners and billboards during Moharam. The property in question is privately owned, and the government has no right to enforce it as a no banner or billboard area.

The amount of Shias killed and wounded from bombs is nearly identical to the same categories from last month. The number of deaths and injuries from shootings have increased this month. The number of deaths from a combination of methods has increased, but the amount of Shias wounded from a combination of methods has decreased dramatically from 62 to seven. Mortar deaths and injuries have also decreased, while beheadings have made their first appearance in the report.

Anti-Shiism is increasing as the year progresses, and it is plain to see how far it is reaching. Iraq is still the deadliest place for Shia Muslims, but Yemen may become a new location for the Shia genocide to take hold. Bahrain remains the country with the most governmental violations against Shias with their arrests, sentences, and police brutality. Finally, just as the events in Pakistan are cooling down, we are seeing more incidents of anti-Shiism in Afghanistan, India, and Indonesia. There needs to be more attention brought to the pain and suffering of these Shia civilians, and there must be a push to end the violence.