Incidents of Anti-Shiism in November 2015

This report will analyze the data compiled on Shia deaths, injuries, and arrests that occurred between November 1st and November 30th.  November has been a high risk month for Shia Muslims around the world.  The attacks towards Shia Muslims stretched from Nigeria to Bangladesh.  Iraq had the highest number of Shia killed, like the previous months.  The total of 610 deaths of Shia were officially reported and 360 were wounded.  The data for this report was gathered from a variety of different sources. The most well-known incidents of anti-Shiism were retrieved from stories that are reported to Shia Rights Watch by eyewitnesses. Each incident is thoroughly evaluated for both authenticity and relevance. For an incident to be included in this report it has to show clear intent to target Shia Muslims on the basis of religious beliefs. The subsequent sections will present and analyze the data gathered by Shia Rights Watch for November. 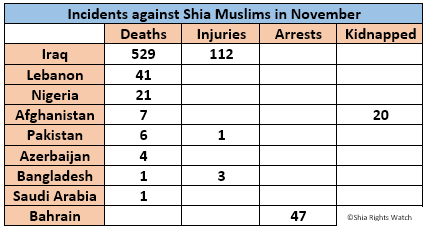 In November, Shia Muslims were victims in nine countries: Iraq, Afghanistan, Pakistan, Bahrain, Saudi Arabia, Bangladesh, Nigeria, Azerbaijan and Lebanon. There were a total of 610 Shia deaths this month, 316 wounded, 47 arrests and 20 Shias kidnapped. Three major events happened this month that made November a high risk month for Shias around the world: the first one was the devastating bombing in Beirut, Lebanon.  41 Shias died in this bombing which ISIS took the responsibility.  The second one is the unexpected violent event in Bangladesh which ended in one Shia killed.  Bangladesh does not witness much violent activities against Shias.  This event starts an unfortunate cycle of terror against Shias in Bangladesh.  The Third high risk violent events belong to Iraq, which continues to witness a high number of Shias being killed.

Compared to last month there has been a %41 increase of death tolls in Iraq.  The number of injuries are almost the same.  This month, like the month before, the city of Baghdad had the highest number of shias killed.  ISIS is still the main responsible group for these killings.  In November we witnessed for the first time the use of explosive dolls.  These dolls target little children and it has been a major shock for the communities and the Iraqi security forces to see this level of brutality.\ 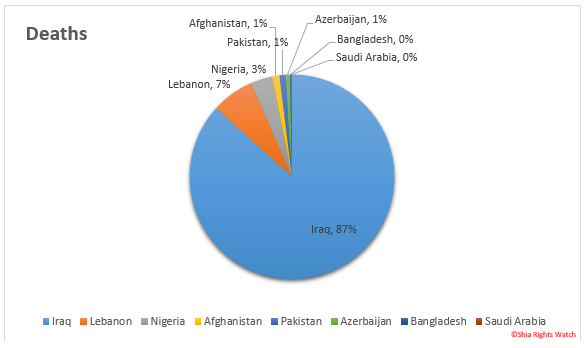 Beirut, Lebanon, witnessed one of its devastating bombings in many years.  This suicide bombing attack was targeted at the southern part of Beirut with majority Shia population.  More than 200 people were injured.

At the end of November, we witnessed a brutal suicide attack by Boko Haram.  This attack was targeted at the Shias of northern Nigeria who were present at an Arbaeen procession.

The Hazara community in Pakistan has been under great pressure and risk.  This month we witnessed the same pattern of individual extremists attacking Shias and their mosques.  Gunmen riding motorcycles and shooting towards Shias is the typical format of such attacks.  In these events the police were injured and in one instance killed.

The population of Azerbaijan is %85 Shia, and although the country is secular and relatively safe, the government does not tolerate any kind of religious activity that expressed any level of criticism towards the President.  Press TV reported that in a big gathering the police killed 4 people who were members of the Movement for Muslim Unity (MMU) during a raid earlier in the day at the north part of the capital Baku.  Several leaders of the MMU were arrested.  Yahoo News reported the same event, but did not mention the religious affiliation of the deceased.

This country has been relatively safe for its Shia citizens.  But this month we witnessed a shooting at a Shia mosque which killed one person and injured 3.  ISIS of Bangladesh claimed the responsibility.

Saudi Police officer was shot and killed in the majority Shia neighborhood of Saihat in the eastern city of Qatif. Nobody has taken responsibility for this attack.

Bahrain’s police arrested 47 members of a group of Shia youth.  The police believe they have links to “terrorist elements in Iran” who it said were planning to carry out attacks in the coming days.  The family members and the Shia community denied such allegations. 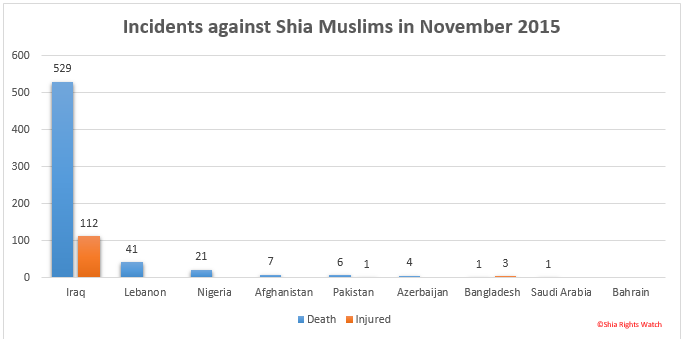