On the occasion of Eid al-Adha

Shia Rights Watch expresses its best wishes on the occasion of Eid al-Adha, to not just members of the Muslim nation, but to the international community.

Eid al-Adha, regarded by some as the Festival of Sacrifice,  calls for the honoring of Ab 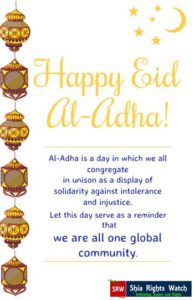 rahams sacrifice, an occasion recognized in Abrahamic religions. While the event is marked by varying names across cultures and religions, observation of this day serves as a recollection of the basis of humanity: altruism.

Traditionally, communities spend al-Adha in celebration of their immediate communities. This year, Shia Rights Watch calls on the observance of the sacrifices made by Shia Muslims all over the world.

In July 2019 alone, 453 violations were reported against Shia Muslims, of which 53 were civilian deaths and 198 injuries resulting from bombings and police brutality in pro-equal rights protests.

In Bahrain, activists are denaturalized, and in a number of cases, executed, for pro-democracy activities. In Nigeria, protesters who stand in the face of state discrimination and limitations in the expression are treated with the utmost violence. In Saudi Arabia, residents of Shia majority towns face the constant threat of raids and shootings by State officers. Yet, all over the world, Shia Muslims still cite prosociality as the basis for their actions.

This eid, in addition to congratulating everyone on the auspicious event of al-Adha, Shia Rights Watch calls on the international community to recognize the lives lost in aims of obtaining human rights.

Let this day serve as a reminder that we are all members of a singular global community. Shia Rights Watch wishes everyone an Eid filled with humanity.