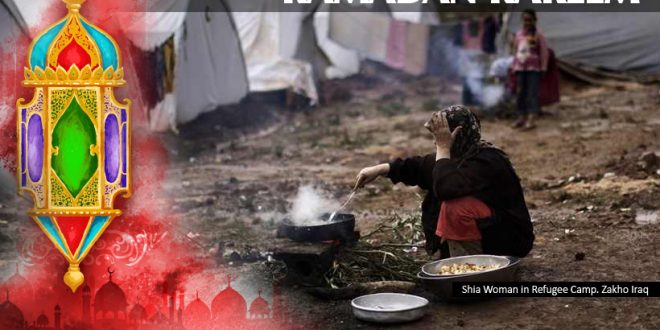 As the month of Ramadan nears, Shia Rights Watch would like to congratulate every muslim on this joyous month. With this month comes faith, love, reflection of the past, and resolution for the future.

In the not so far past, Shia muslims were a population not only ostracized, but prosecuted for their beliefs. Unfortunately, such cases continue today in nations, both in the west and in the east. Shia muslims are often targeted by hate groups and are discriminated against. Even in majority shia populated nations such as Bahrain, anti-shia sentiment rises everyday, allowing for marginalization of this group in their own homes.

Shia in locations like Pakistan and Iraq are killed via targeted  attacks and mass graves hold the bodies of massacred Shia populations in Nigeria. Violations against Shia Muslims have left thousands,  if not millions, displaced and destitute, as they are forced to leave their homes in fear of getting killed and/ or targeted for further abuse. Camp Zakho of Iraq has become home to a large number of Shia men, women and children who have fled their homes in ISIS infiltrated regions of Iraq.

Unfortunate to Shia Muslims however, the anti-shia narrative fueled by Wahhabi forces have severely limited the Shia search of safety.

This Ramadan, Shia Rights Watch invites all to come together in promoting unity and advocating for human rights.  Let us join together in creating a resolution by which all minority populations, especially that of the Shia population, are treated as equals in the eye of the law and even social constructs such that targeting a group is no longer feasible economically, politically, or socially. Join us in using the essence of justice and charity, both prominent principles for this holy month, in educating not only ourselves, but others in basic human rights and encourage their implementation in our surroundings.

Take a first step in renewing your commitment for building peace by joining Shia Rights Watch and thousands of human rights defenders on June 12, 2016, the International Shia Day. Make a pledge to defend your equals in humanity and use #612shiaday to post your pledge on social media to express your values and concerns.