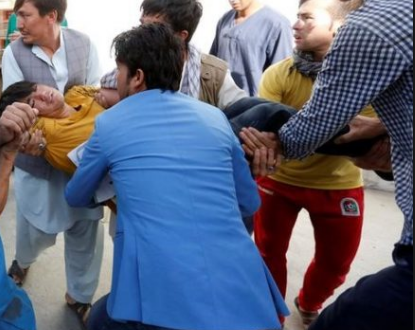 Shia Rights Watch strongly condemns recent attack to Afghan Shia community this Saturday as 80 people were killed and more than 260 were wounded.

Although life has never been easy for Shia minority, Afghan Shia have suffered more than many of their fellow Shia in neighboring country. Afghanistan has been under harsh and inhumane influence of Taliban, mother of number of other terror groups and as usual minorities such as Shia suffered the most.   Hazara, minority group that resides in Balochistan, Pakistan and Karachi are overwhelmingly Twelver Shia Muslims and make up the third largest ethnic group in Afghanistan. This population have lost many members due to targeted killings and bombings, yet their unfortunate news barely make it to the news outlets.  Advocacy for Afghan Shia has not been easy as well as this population have been under so much pressure that do not feel safe to stand up for their rights and echo their voice. As it is proven by history, every time this population stand up, protest and demand their rights to security, a bombing suppress them even more.

SRW staff and members stand with solidarity with those how lost loved ones due to Shia rights violation in Afghanistan and elsewhere.