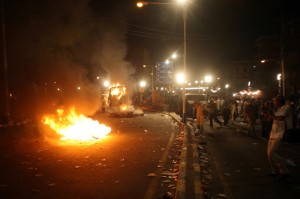 At least 33 people have been killed and up to 170 others wounded after a series of blasts struck processions of Shia Muslims in the Pakistani city of Lahore, officials say.

The blasts on Wednesday, suspected to be suicide bombings, hit three separate locations as 35,000 Shia Muslims marched in a traditional mourning ceremony for the assassination of Ali, the Prophet Muhammad’s cousin, some 1,300 years ago during the month of Ramadan.

“The three explosions took place at the end of a Shia Muslim mourning procession in Lahore city,” AFP news agency quoted a police official as saying on Wednesday.

It was the latest in a long history of violent attacks against Shia Muslims, which are frequently claimed by extremist and pro-Taliban groups, although they had halted in recent weeks as the country struggles with some of its worst flooding in decades.

Yousuf Raza Gilani, Pakistan‘s prime minister, condemned the attacks, saying in a statement that the attackers would not escape justice.

After the blasts, the marchers erupted in fury, setting fire to a police station, another police facility, two police cars and three motorcycles, Zulfiqar Hameed, a senior police officer, said.

Police threw tear-gas canisters at the crowd and fired shots in the air to disperse the crowd, he said.

The first blast was a time bomb that exploded in the street near a well-known Shia Muslim building, Hameed said.

Footage of that explosion shown on Pakistan’s private Geo television channel showed a small blast erupting amid a crowd of people on the street followed by a large plume of smoke.

Hundreds of people fled from the blast, while others rushed to carry the wounded to safety.

Minutes later, with the streets in chaos, a male suicide bomber who appeared about 18-years-old tried to force his way into an area where food was being prepared for the marchers to break the traditional Ramadan fast and exploded, Hameed said.

Soon after, another suicide bomber detonated himself at an intersection near the end of the procession.

Abbas Kumaili, a prominent Pakistani Shia Muslim scholar as well as a senator, called for three days of mourning over the attack and condemned the bombers.

“They are our enemies, both Shias and Sunnis should remain united and foil their evil designs,” he said.

Hours earlier, three people were wounded in a shooting near a similar Shia Muslim procession in the southern city of Karachi, but Iqbal Mahmood, a senior police officer, said the incident did not target the march.

Also on Wednesday, a bomb exploded near a police vehicle in the town of Shabqadar in northwest Pakistan, killing one passer-by and wounding 15 people, including one police officer, Nisar Khan, another police officer, said.

The bombings came after Pakistan army jets and helicopters targeted fighters’ hideouts near the Afghan border, killing 60 people identified as fighters or their family members, including children, security officials and a witness said.