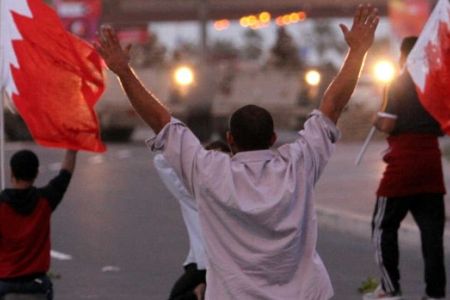 February 14th, 2021 marks the 10th anniversary of Bahrain’s uprising. The people of Bahrain first took to the streets in 2011 in protest of the nation’s dissatisfactory conditions. A decade has passed since demonstrators took to the streets to demand reform but human rights seem farther than ever.

February 14th is also the anniversary of the National Action Charter of Bahrain in 2001 and the 2002 Constitution in which King Hamad bin Isa al-Khalifa’s instituted a set of democratic reforms both documents in response to social calls for reform.

Inspired by the uprisings in Egypt and Tunisia, Bahraini youth participated in 55 marches in 25 locations across the country, in nonviolent protest to discriminate rulings in the hands of the monarchy.  Despite the peaceful nature of the protests, tens of individuals were injured and a number were killed as a result of the violent response by national forces.

Since 2011, Shia Muslims of Bahrain face increased restrictions in congregation and freedom of speech. Political groups who voiced support for democracy have been disbanded and activists face long sentences and denial of due process. Officials instituted zero-tolerance policies for critique or any association with opposition groups. So much so that social media posts, likes, and retweets were used as the basis for the arrest and even removal from public sector occupations.

Bahraini Shia Muslims continue to live under extreme human rights detriment as violations toward them increase and expand without any international interventions.  In 2020 alone, Shia Rights Watch reports 230 new arrests (this number does not include the tens of individuals who were arrested in 2019 and have yet to be sentenced).

Moreover, Shia Rights Watch records cases of torture within detention centers as a means of deriving false confessions. Violations include but are not limited to sexual abuse.

None-the-less, human rights and democratic reform in Bahrain have not received any support from the international community. Nations like the United States and the United Kingdom who expressed immense support for democratic efforts in Egypt and Tunisia failed to recognize the people’s movement in Bahrain.  Between 2012 and 2019, the United Kingdom provided 6.5 million pounds in technical assistance. In 2019, the United States States Department undertook weapons sales worth 3.4 billion dollars.

Shia Rights Watch expresses concern for Shia Muslims in Bahrain, especially on the anniversary of February 14. Shia Rights Watch emphasizes that authorities in Bahrain must refrain from using excessive force against protesters as mass protests can be expected during February.  They have to regain their citizens’ trust by equal treatment and by releasing detainees unconditionally.

Moreover, we call for independent oversight into the conditions of human rights in Bahrain by the international community and appropriate changes in economic exchange as a form of accountability.