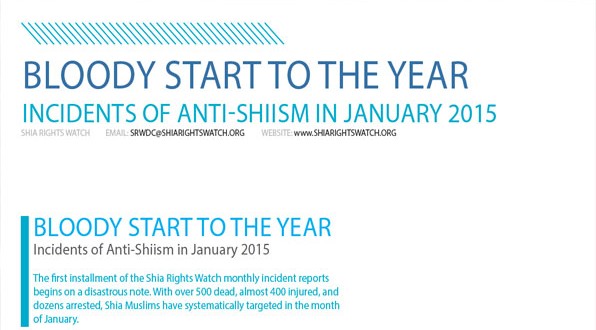 Bloody start to the year January 2015

Bloody start to the year

Incidents of Anti-Shiism in January 2015

The first installment of the Shia Rights Watch monthly incident reports begins on a disastrous note. With over 500 dead, almost 400 injured, and dozens arrested, Shia Muslims have systematically targeted in the month of January.

This report will analyze the data we compiled on Shia deaths, injuries, and arrests that occurred between January 1stand January 31st. The data gathered from this report came from a variety of different sources. The most well-known cases of violence against Shia were gathered from media sources such as Al-Jazeera and BBC. The picture painted by popular media sources is incomplete and did not report on dozens of incidents that occurred in Iraq. For incidents that occurred in Iraq, the report consulted the Iraq body count, an organization that tracks all violent incidents throughout the country. Four graphs and their corresponding charts have been added to this report to illustrate the severity of this phenomenon. In addition to the graphs, this report will highlight some cases of anti-Shiism that occurred in January.

Where have Shia Muslims been targets of violence?

January saw Shia Muslims systematically targeted in four countries: Syria, Bahrain, Pakistan, and Iraq. The targeting highlighted in this report are murders, injuries, and arrests. In total, there have been 539 deaths, 384 injuries, and 24 arrests.  This does not include incidents such as the revocation of citizenship which occurred in Bahrain.
The bulk of violent incidents have occurred in Iraq, which has witnessed dozens of bombings in Shia neighborhoods. As with the deaths, the bulk of injuries have come in Iraq as well. All of the arrests have occurred in Bahrain. The large number of arrests in Bahrain relative to the other countries in this report highlights the variations in the sources of violence against Shia. In Syria, Pakistan, and Iraq, violence against Shia has largely come from militant groups such as the Islamic State in Iraq and al-Sham (ISIS) and Ahlu Sunna Wal Jama (ASWJ). The next section of this report will delve into the data collected and provide explanations behind the violence the world is witnessing. 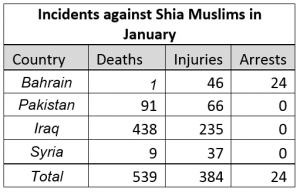 The violence by non-state actors against Shia in Iraq has dwarfed the amount of violence occurring in other countries. The 438 deaths and 235 injuries that occurred in January in Iraq would have made it the second most violent country all year last year behind Pakistan. Bombings in Shia neighborhoods in Baghdad have killed scores of people at a time. Not only do bombings in highly populated areas have high death counts, they tend to injure just as many people as they kill and leave a large amount of property damage in their aftermath.

There was only one event recorded for this country but the casualties incurred made it account for two percent of the deaths and ten percent of the injuries. A bus carrying Lebanese Shia pilgrims traveling near Damascus, Syria was the victim of a explosion that killed nine and injured 37. 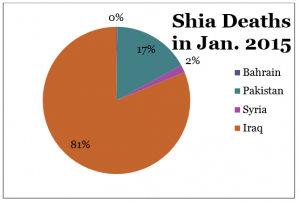 There was one death and 46 injuries in this country in January. Bahrain accounted for 12 percent of the injuries and 100% of the arrests in the month. Shia in Bahrain are not facing indiscriminant violence at the hands of non-state terrorist groups like the other groups on the list, but are rather facing repression from the government. Shia in Bahrain regularly protest the Al-Khalifa regime and they are just as regularly met with violence by security forces. On January 31st, the Bahraini government revoked the citizenship of 72 Bahrainis on grounds of damaging national security. This was the largest case of citizenship revocation since the start of the Arab Uprisings in 2011. Since this event did not involve an arrest, a death, or  a physical injury it was not used for statistical purposes .

After witnessing almost 1,000 Shia deaths in 2014, this country has seen a continuation of the same type of violence as was witnessed last year. ASWJ and its affiliates have continued to carry out targeted assasinations of Shia in towns around the country. On January 7tha 15 year old by was gunned down by these militamen, and on January 31sta 70 year old man was shot and killed outside of a hotel in the city of Orangi by militants. Other than targeted assasinations, militants have also been targeting mosqueswhich can be seen in the explosions at mosques in Rawalpindi,and  Shikarpur. The explosion at Shikarpur was the deadiest event in January and will be discussed in greater detail in the next section. 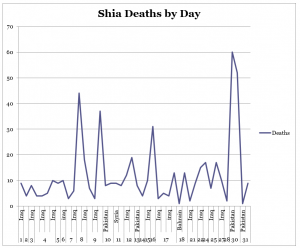 Although Iraq was by far the most violent country for Shia in January, the worst incident in the month came in Pakistan. In the city of Shikarpur, roughly 100 miles north of Karachi, a bomb exploded at a Shia mosque right after the conclusion of Friday prayers. In this incident 60 people were reported dead and 50 reported injured. Many of the people were killed by the blast but numerous others were killed and suffered injuries as a result of the roof of the mosque collapsing from the blast.
This chart exhibits how anti-Shiism is a relatively constant trend across these countries as deaths of Shia tend to hover around ten per day. Deviations from this trend sadly come when there is a mass casualty event such as the mosque bombing in Pakistan and the three large explosions in Shia neighborhoods of Baghdad.
Although the news may report incidents of terrorism as sporadic events, when one looks at the data compiled for incidents of violence and intimidation against Shia it is clear that terrorism is a daily occurrence in these countries.