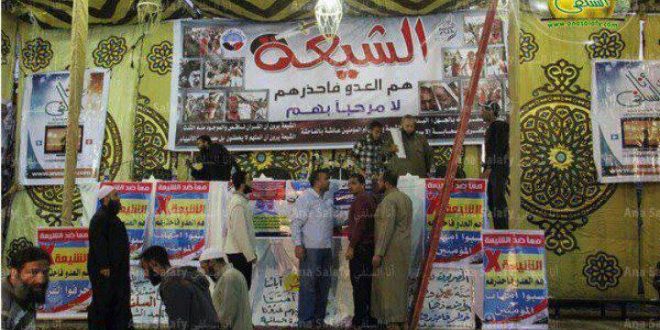 While the history of Shia Muslims in Egypt is long and extensive, anti-Shiism is prevalent in this nation. Once called the forgotten minority, Shia Muslims in Egypt are lost amidst country’s political unrest. Shia numbers are always undermined in state-issued reports in aims of suppressing the population. Shia individuals that express their religious beliefs are arrested, detained and questioned by their identity. Even when Shia rights are violated by non-government entities, sources report a lack of police support. Officials will either not action in the prosecution or will give anti-Shia perpetrators the least punishment.

The biggest graphic display of anti-Shiism was in the case of Shaikh Hassan Shehata, a Shia cleric from the village of Zawya Abu Muslim in Giza. The village was raided by perpetrators of anti-Shiism, and Shehata and some others were beaten, stabbed and dragged into the streets.

Anti-Shia sentiment is spread through education at all levels.  Clerics who educated at Al- Azhar University publicly promote sectarian beliefs by calling Shia Muslims infidels and encourage isolation and marginalization of Shia Muslims in Egypt.

In a video recently sent to Shia Rights Watch, Egyptian soldiers torture two Shia men. The video, over 2 minutes long, shows Egyptian forces calling the men by derogatory terms, kicking him and mocking them. The men look as if they has been running for an extended time frame as their feet are bloody and cannot stand or walk for long distances.

The video can be traced by the soldier’s uniform and badges as well as their Arabic dialects to Egypt. Soldiers repeatedly the men infidels (KAFER) and announcing them as members of the “Mahdiya” Shia community center.

Increased anti-Shia sentiment in Egypt and the government’s discrimination has marginalized Shia communities and forced them into hiding.

Shia Rights Watch demand the identification and prosecution of the Egyptian soldiers in the video.  Further, SRW calls for restitution for the two men tortured. Anti-Shia sentiment perpetuated by the Salafi cleric and social organizations has led to sectarian violence in the nation. SRW warns the international committee that Egypt’s lack of support for Shia Muslims fuels regional unrest. Cases of Anti-Shiism must be examined in the United Nations as crimes against humanity and justice must be served for this religious minority.

WARNING: This video has graphic content that may be disturbing to some viewers