Incidents of Anti-Shiism in December 2015

This report will analyze the data compiled on Shia deaths, injuries, and arrests that occurred between December 1st and December 31st.  December has been a relatively low risk month for Shia around the world with the exception of the massacre in Nigeria.  The attacks towards Shia stretched from Nigeria to Pakistan and they were focused in 6 countries.  Iraq, like the previous months, had a constant rate of Shia killings.  A total of 549 deaths of Shia were officially reported and 106 were wounded.  For this report we used the most conservative estimate of the Nigeria massacre which was reported between 300-1000 deaths.  The data for this report was gathered from a variety of different sources. The most well-known incidents of anti-Shiism were retrieved from stories that are reported to Shia Rights Watch by eyewitnesses. Each incident is thoroughly evaluated for both authenticity and relevance. For an incident to be included in this report it has to show clear intent to target Shia Muslims on the basis of religious beliefs. The subsequent sections will present and analyze the data gathered by Shia Rights Watch for December.

In December, Shia Muslims were victims in six countries: Iraq, Pakistan, Bahrain, Saudi Arabia, Nigeria and Azerbaijan. There were a total of 549 Shia deaths this month, 106 wounded, 65 arrests and one Shia was sentenced to death.  One major event happened this month that devastated all human rights activists and the Shia communities around the world: the massacre in Nigeria which is officially reported with 300 deaths, but many credible sources believe the number is closer to 1000.

Compared to last month there has been a %58 decrease of death tolls in Iraq.  The December deaths and casualties in Iraq shows that Iraq continues to be the most persistent and continuous high risk country for Shias. The number of injuries in December are half of November’s.  This month, like the month before, the city of Baghdad had the highest number of Shia killed.  IEDs and gunfire are the most common reason of deaths in Baghdad.  ISIS is still the main responsible group for these killings.  The lower number of bombings and deaths in Baghdad is believed to be connected to the mass anti-ISIS campaign in Ramadi which has been challenging ISIS worriers and gaining their attention for this battlefield.

In the middle of December, we witnessed the most brutal massacre of Shia in Nigeria.  This massacre was executed by the Nigerian National Army.  Many observers believe the death toll is near 1000.  Official reports confirm at least 300 dead.  There is an immense lack of clarity regarding the number of casualties and deaths because every other day mass graves are being discovered and the Nigerian National Army arrests activists and reporters who investigate this incident.  The Human Rights Watch has confirmed that the Nigerian National Army buried all the bodies without the permission of family members.  The leader of the Shia in Nigeria, Sheikh Zakzaky, was heavily beaten and injured during this raid.  He is currently arrested and there are many reports about the lack of proper health care for him.  Shia Rights Watch is deeply concerned about the continuous assaults on Shia in Nigeria and their lack of basic human rights. 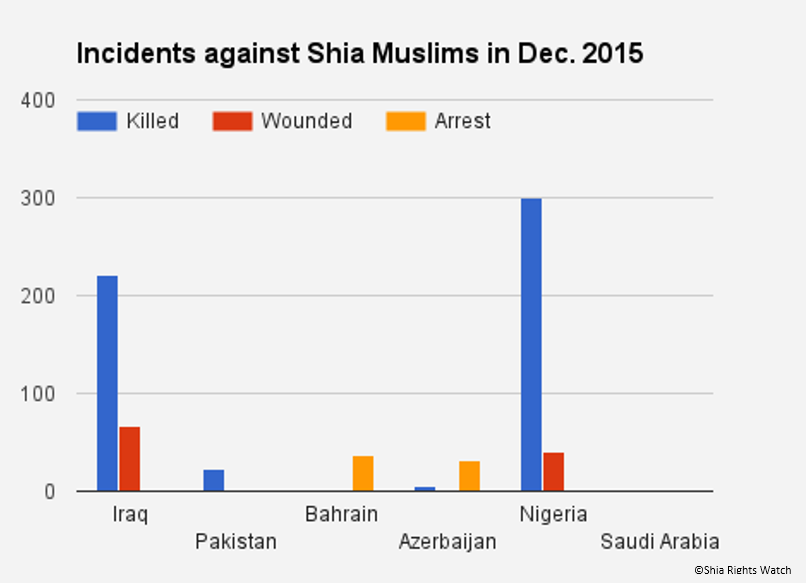 A bomb has been exploded in the central market of the predominantly-Shia city of Parachinar in Pakistan’s sprawling tribal belt.  At least 23 were killed and many wounded.  There is no official data for the number of the wounded but the police announced at least 23 bodies were identified.  There was no immediate claim of responsibility for the blast, but Pakistani security agencies believe it comes within the context of ongoing Sunni-Shia sectarian violence that has claimed thousands of lives across Pakistan over the last three decades.

Since last month (November 2015) there has been an ongoing cycle of assaults against the Shia of Azerbaijan.  The population of Azerbaijan is %85 Shia, and although the country is secular and relatively safe, the government does not tolerate any kind of religious activity that expressed any level of criticism towards the President.  Azerbaijan’s Interior Minister, Ramil Usubov, said that the Shia had been targeted in the eastern village of Nardaran for allegedly plotting a coup against the government.  He mentioned that 5 Shia (members of the Movement for Muslim Unity) were killed and 32 were arrested.  Azerbaijan’s parliament has been debating a law to ban the display of flags honoring the martyred Shia Imam Hussein on streets and also prohibiting those Azerbaijanis who have received religious education abroad from performing religious ceremonies.  The incidents in Azerbaijan are extremely concerning for the Shia Rights Watch, since the government does not allow any independent human rights organization to operate and investigate in that country.  We believe that Shia of Azerbaijan will face more human rights abuse since this country has been under the radar and does not receive any coverage regarding its human rights abuse. 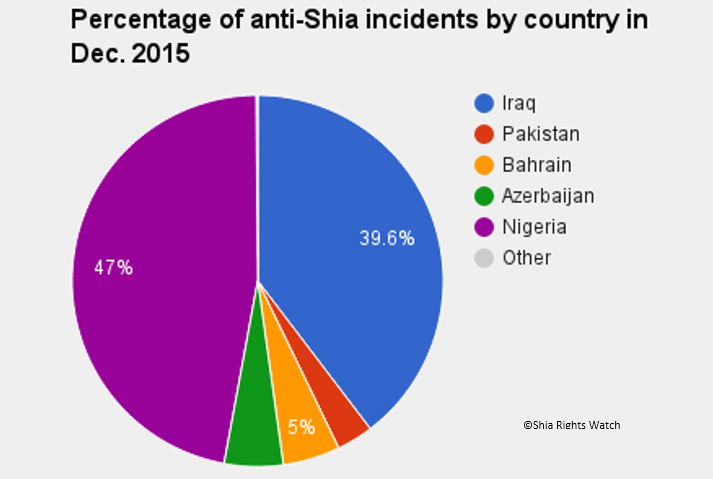 Abdullah al-Zaher, the youngest person currently sentenced to death in Saudi Arabia, has been sentenced to death by the Saudi court.  Zaher, who is 19 years old now, was just 15 when he was arrested after attending an anti-government demonstration.  He was sentenced to be beheaded.  There is still no information about the date of the execution.  Many human rights organizations condemned his trial and believe it was unfair and flawed.  His father believes that Zaher was forced to confess to crimes he did not commit and he was denied the right to consult with a lawyer or with his family.

The Bahrain Human Rights Society (BHRS) said that the Bahraini authorities arbitrarily arrested 13 citizens during the first week of December.  Meanwhile A Bahraini court sentenced a Shia citizen to death and jailed 22 others for life for forming a “terrorist group”.  The court also revoked the citizenships of the 23 convicts and some sources said that they were tried in absentia.

Although the number of Shia deaths and assaults in December has been almost the same as the previous months of 2015, the level and type of December’s assaults have been immensely worrisome.  The Nigeria massacre has shocked many around the world, since it has been one of a kind in the recent history of Nigeria.  The maltreatment of Shia communities in Nigeria and taking away their basic human rights is the start of a horrific cycle of violence and religious intolerance.  The incidents in Azerbaijan are also important, not by number, but by the context of the assaults.  It is highly expected that the government of Azerbaijan will increase its raids on Shia ceremonies and most likely we will observe more violence and systematic intolerance against Shia activists in Azerbaijan.  In Iraq, Pakistan, Bahrain and Saudi Arabia although the number of anti Shia incidents were significant, they were not surprising to us compared to the previous months of 2015.   The lack of a clear and just judiciary procedure in Bahrain and Saudi Arabia remains a highly sensitive issue for the Shia Rights Watch, and the recent advances in Iraq by the Iraqi government in liberating Ramadi gives us hope to see less violent activities in the Capital city against the Shia Muslims.