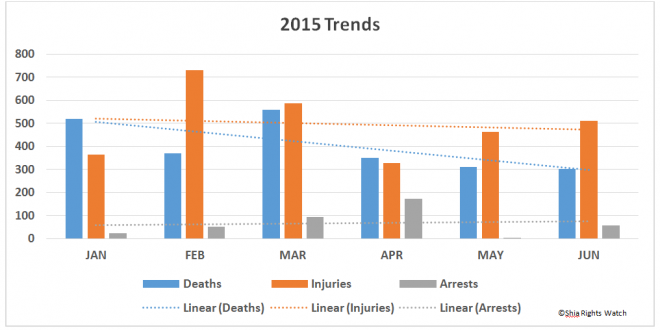 This is the sixth installment of the Monthly Anti-Shiism Report which means we are half way through the year. In 6 months, there were at least 2386 Shias killed and 2771 injured as a result of anti-Shiism. There were also 117 Shias abducted since the beginning of the year, and 230 arrested for being Shia. On average, 402 Shia die every month and 497 more are injured as a result of sectarian hatred. The violence against Shias continues every day even though the amount of Shia murdered has decreased month to month. The amount of Shia abducted or arrested has slowly increased throughout the year. 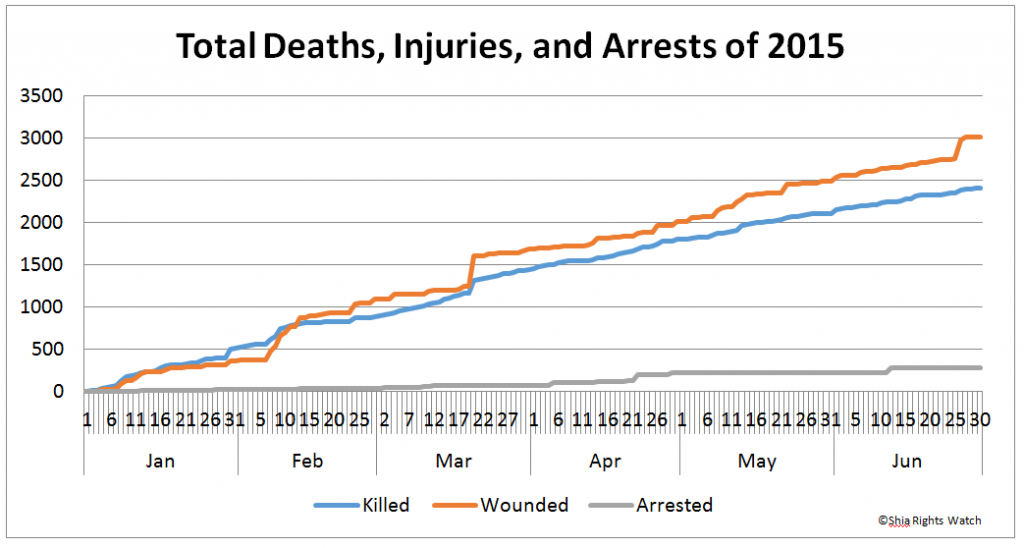 This year began with 4 countries with incidents of anti-Shiism, and in 6 months it has expanded to include 19 different countries[1]. The worst day this year for Shia Muslims was March 20th when there was a triple mosque bombing in addition to other incidents of anti-Shiism in Pakistan and Iraq. There were a total of 150 deaths and 363 injuries from this incident in Yemen. If one looks at the graph “Total Deaths, Injuries, and Arrests of 2015,” then it will be observed that there are a few spikes in the number of wounded. The first sharp increase occurs in February when there were multiple days within one week with a hundred or more deaths. The second spike is the Yemen mosque bombing in March, and the last one is the mosque bombing in Kuwait this month.

The methods used to attack Shias are listed in order of most casualties to least casualties: bomb, a combination of methods, mortars, shooting, and beatings. The most dangerous places to be a Shia are Iraq, Yemen, and Pakistan while 60 percent of the arrests for the year are in Bahrain. Iraq makes up 80% of all Shias killed and 68% of all Shias injured for anti-Shiism this year. That means that 1897 of the 2414 deaths occurred in Iraq, and 1875 of the 2771 injuries happened in Iraq. Afghanistan makes up 26 percent of the Shia who are arrested or abducted, and not all 106 Shia who were abducted in Afghanistan made it home alive. 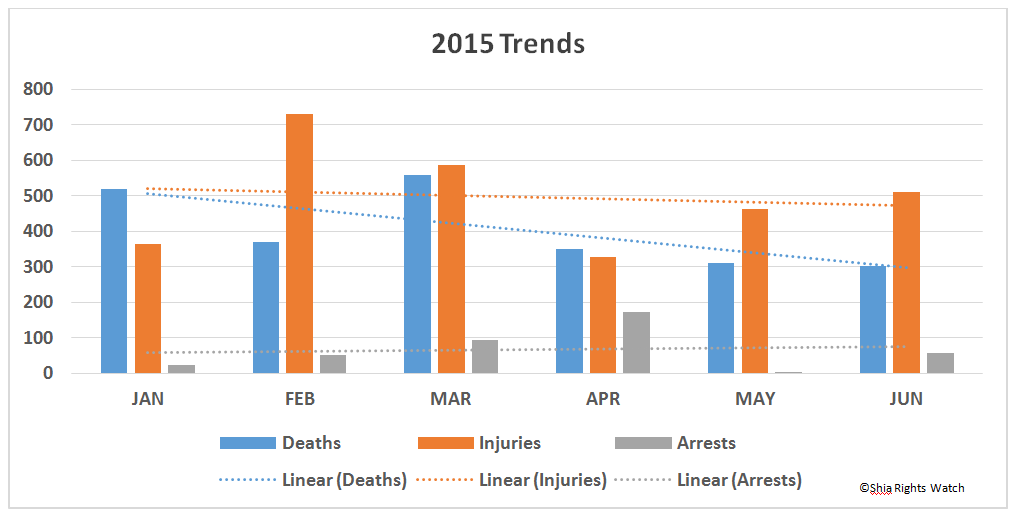 Incidents of anti-Shiism in June 2015

There has been a decrease in the number of Shia killed during attacks and an increase in those that were injured. The amount of Shia arrested has increased from last month, and appears to continue and upward trend with a possibility of leveling off. There were over 300 deaths and more than 500 injuries this month. These figures result in an average of 11 deaths per day, and 17 injured Shia every day. Violence against Shia is found in the usual countries this month, but it is now confirmed as present in Egypt, Kuwait, and the United Kingdom in 2015. Anti-Shiism is a growing trend that will continue to gain notoriety until the international community addresses the issue.

This report will analyze the data compiled on Shia deaths, injuries, and arrests that occurred between June 1st and June 30th. The data for this report was gathered from a variety of different sources. Each incident is thoroughly evaluated for both authenticity and relevance. For an incident to be included in this report it has to show clear intent to target Shia Muslims on the basis of religious beliefs. The subsequent sections will present and analyze the data gathered by Shia Rights Watch for June. 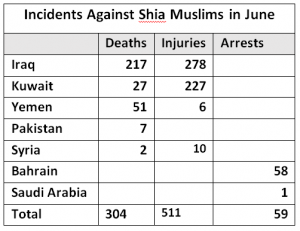 June saw Shia Muslims targeted in 9 different countries: Iraq, Kuwait, Pakistan, Saudi Arabia, Yemen, Syria, Bahrain, Egypt, and the United Kingdom. In total there were 304 deaths, 511 injuries, and 59 arrests that we are aware of. Although this report will focus primarily on the aforementioned categories, incidents such as the lenient sentences of Shia murderers in Egypt and graffiti in the United Kingdom will me included.

The bulk of violent incidents have occurred in Iraq, which has witnessed countless bombings in Shia populated areas. Kuwait faced a devastating terrorist plot against a Shia mosque which made the international community take notice of the violence. Yemen suffered heavy casualties in residential areas during Saudi air strikes as well as quadruple mosque bombings. Bahrain had nearly all of the arrests this month, but Saudi Arabia remembered to oppress at least one Shia as well. Thankfully, many have put down their arms during the month of Ramadan, and hopefully there will be peace for more than just Ramadan. The next section of this report will present and analyze the data compiled on anti-Shiism.

The violence against Shia Muslims in Iraq continues to be the actions of non-state actors persecuting Shia for their beliefs. The deaths against Shia in Iraq result from bombings combination of some form of bomb and gunfire whereas the injuries only occur from bombings. There were at least 217 deaths and 278 injuries in Iraq this month as a direct product of the Shia Genocide. The number of deaths in Iraq is a slight decrease from 221 of the previous month, and the injuries decreased from 305 to 278.

More graves are discovered every day from Daesh’s systematic slaughter at Camp Speicher last year, and Shia Rights Watch organized the first International Shia Rights Day on June 12th to remember those who lost their lives so brutally. 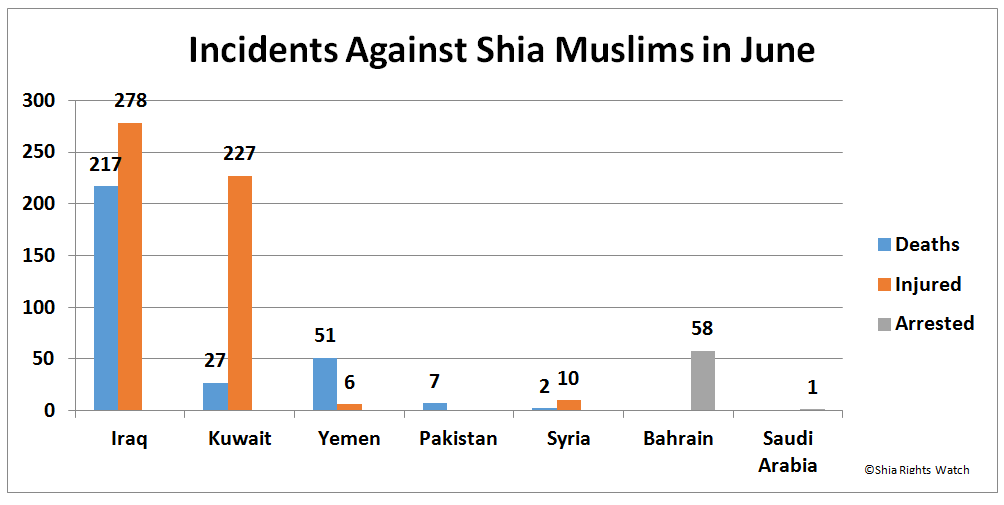 On June 15, Saudi Arabia conducted air strikes on al- Hazm residential areas which killed at least 18 Shia and injured dozens more. Daesh picked up where it left off in March with more Shia mosque bombings, and this time it resulted in the death of 31 Shia. The United Nations is urging both the Saudi coalition and the Houthis to agree to a ceasefire during the month of Ramadan, but it is yet to be seen if there will be any semblance of peace in Yemen any time soon.

There were three incidents of anti-Shiism in Pakistan this month that we are aware of, and they were both shootings. The attackers continue to use drive by shootings as well as firing upon soft targets such as popular markets. There were at least 7 Shia deaths in Pakistan this month. It is promising to see Pakistan continue to have decreasing amounts of anti-Shiism considering how poor the situation was just last year. 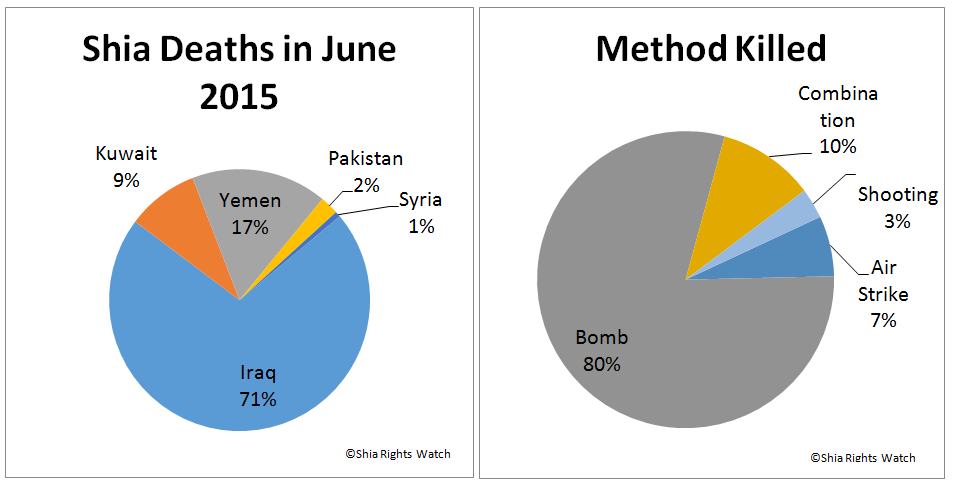 According to Shia Rights Watch sources in Syria, Daesh conducted air strikes in Idlib, and killed 2 teenage girls in addition to injuring 10 other Shia. The Syrian Civil War has been ongoing since 2011, and the remaining Shia in Syria will not be safe if Daesh or al Nusra Front succeed in toppling the government.

Bahrain is back to its usual arrests, detentions, and unfair sentencing this month. Sheikh Ali Salman was sentenced to 4 years in prison for tweeting about regime change, and Imam Sayyed Musa al-Wasa’ee was arrested on national security charges. The Bahraini government jailed 57 Shia citizens, stripped them of their citizenship, and gave them sentences ranging from 3 years to life in prison. Meanwhile, thugs broke into the al-Khafif Mosque to vandalize it and destroy Qur’ans. Shia Rights Watch condemns the arbitrary detention and sentencing that the Bahrain regime has become known for since the beginning of the Arab Spring in 2011.

There is a possibility for a terrorist attack in Bahrain considering the recent bombing of a Shia mosque in Kuwait, and the fact that the bomber passed through Bahrain to get there. The authorities have stepped up security, but it will be interesting to see if they can prevent an attack while simultaneously oppressing the same group of people they are attempting to protect. 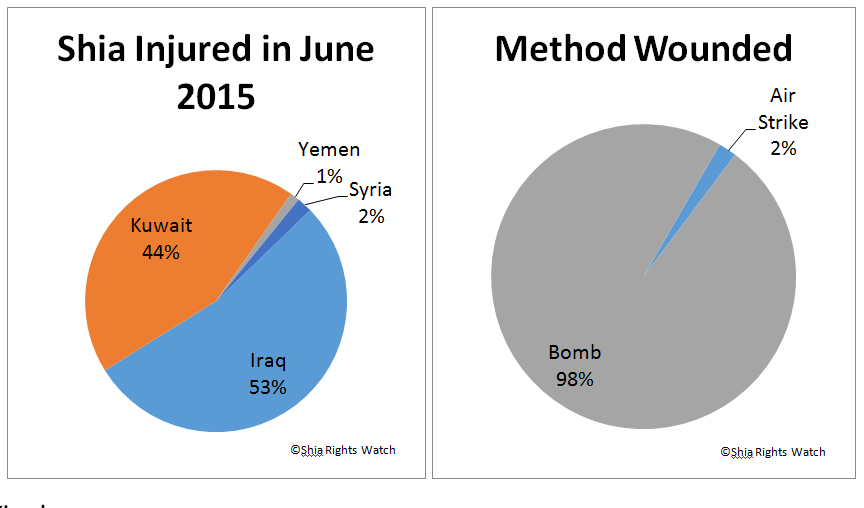 A Shia man, Mohammad Ali al-faraj was arrested in the street and beaten for no apparent reason. His family is unaware of his detention center. Mohammad is the brother of Salman Ali al-faraj who is wanted in connection to uprisings in the Eastern Province of Saudi Arabia. It is unclear if Mohammad has committed a crime, or if he is being unlawfully detained. However, his family deserves to know where he is being detained, and what crime, if any, he is charged with.

On June 21, the words “Shia Kafir” were spray painted on the exterior walls of the Hussania Islamic Mission in Bradford, West Yorkshire in the United Kingdom. This is the first record of anti-Shiism in the United Kingdom this year, but according to Tell MAMA UK there were pamphlets distributed last year that stated, “Shiism is a religion outside Islam.” It is apparent that there is some amount of the population of Bradford that has anti-Shia sentiments, and it needs to be investigated to find the source. Shia Rights Watch urges Shia in the United Kingdom to counter anti-Shiism with education and understanding.

Daesh continued its unobservant behavior when it bombed a mosque during Ramadan. The bomber was from Saudi Arabia, and took a flight from there, through Bahrain to Kuwait. It is clear that there is a network that supported his attack which resulted in the death of 27 Shias and the injuring of 227 more. There is obviously some portion of the population which agrees with Daesh, because it would be difficult to accomplish this amount of devastation without help. Al Qaeda and Daesh may be takfiri terrorist organizations, but at least Al Qaeda does not bomb mosques, especially during Ramadan.

There were reports of anti-Shiism in Kuwait just two days before the mosque bombing orchestrated by Daesh. During a debate in Paliament, MP Hamdan al-Azemi told a Shia lawmaker, “You should rectify your sect.” Faisal al-Duwaisan took offense to the comment, and stated that he will resign from Parliament unless al-Azemi apologizes. Shia make up about a third of Kuwait’s population, and this are the first cases of anti-Shiism in Kuwait this year.

In June of 2013 a mob of Takfiri Salafis attacked a small Shia community in Egypt, and on June 14, 2015 23 of those involved were convicted of murder. They were sentenced to 14 years in prison, but protesters of the ousting of Mohamed Morsi were sentenced to death. It is clear that these people were given lenient sentences, because their crimes were committed against Shia. Shia Rights Watch requests that the Egyptian government reevaluate the sentences for these men in favor of a more appropriate sentence.

The amount of Shia killed by bombs this month has increased by 16%, and the amount of Shias wounded from bombs has increased slightly from last month. The deaths from shootings decreased this month, and this month there were no injuries sustained from gunfire. The utilization of a combination of methods to kill Shia has decreased dramatically from 78 to 32. There have been no beheadings or stabbings of Shia this month. There were also no abductions of Shia this month that we are aware of at this time.

More governments and government officials are taking anti-Shia stances, and it is a worrying trend. Citizens look to the government for leadership, and these attitudes can have a significant impact on the populace. Inshallah the populace will not give into sectarian division as the officials have, and the Saudi war against the Houthis will end quickly to aid the humanitarian efforts to those who need it. Daesh seems to be gaining strength around the world even as they are losing ground in Iraq and Syria, and their brutality must end before it is too late. Anti-Shiism would appear to be on a downward trend, but the mosque bombing in Kuwait changed the outcome for this month. Hopefully anti-Shiism will continue to decrease as the year continues. Ramadan Mubarak!