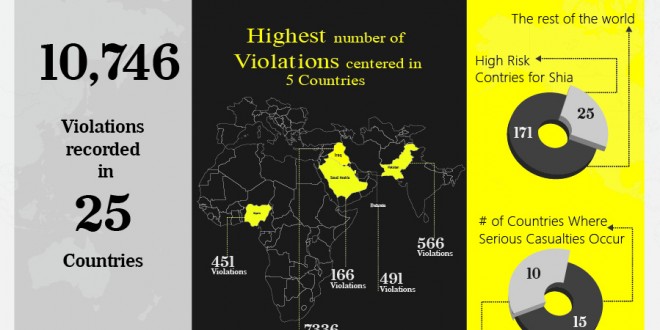 SRW annual Casualty Report, depicting cases of anti-Shiism throughout the past year including cases of arrest, injury, murder, and detainment. Based on in depth research of SRW, an average of, twenty-nine to thirty Shia Muslims were killed, arrested, or wounded on a daily basis in 2015.

“2015” reports 5093 Shia Muslims are killed, 5416 wounded, and 431 arrested during between January 1st to December 31st, 2015.  Both state and non-state agents such as ISIS have claimed responsibility for these attacks, making the Shia people largely unsafe in 25 countries around the world; Shia have claimed to feeling insecure in 50% of all Islamic nations.